Yes, there is a Hollywood Blacklist

That’s the affirmative answer to “Is there a Hollywood Blacklist?” that's often asked 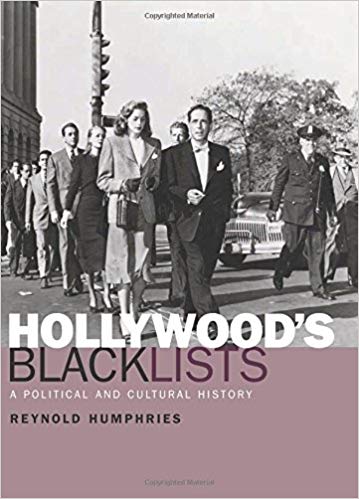 It exists as certainly as political correctness and passive aggressiveness in Hollywood exist, and you know that it abounds and destroys the talented who take umbrage at George Bush jokes from the subtext of the parting audition “thank you for coming in” to the silence of the phone that follows. 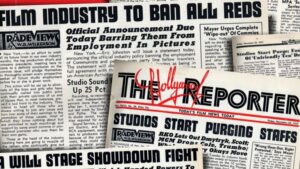 But today’s blacklist is different from the one publicly posted by anti-communists during the 50s. This one resides in the like-minded whispers of the leftist candor cowards who took over Hollywood’s power positions during the 60s. And it doesn’t just embrace conservatives. Even liberals can find themselves on it for an act of political indiscretion. Think what you will about that 50s list, at least it was posted openly by men. The current one is hypocritically hissed in secret by boys who need accoutrement bodyguards to visit the men’s room.

You know who you are.

I first heard about the consequences of crossing Hollywood’s prevailing liberal orthodoxy from the late film and TV director Alex Grasshoff. 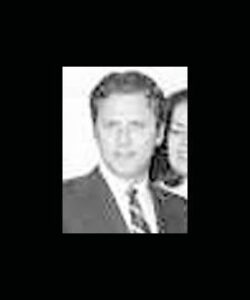 His wife, Madilyn, had invited me to a birthday party at their Mulholland home where I had a chance to talk with him at length. Grasshoff was nominated for Oscars three times. When he finally won, he and his wife were so elated that they slept with the statue the first night. But the high was short lived. A few days later, Grasshoff became the first and only person to date to have the Academy take back a winner’s Oscar. 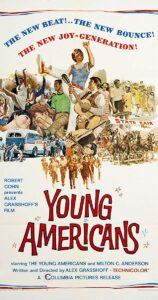 Unbeknown to Grasshoff, he said, his film, Young Americans,  was briefly shown in a theater prior to the official award year so according to Academy rules, the film did not qualify for Oscar consideration.

That experience was a killer, Grasshoff, told me, but it was nothing compared to losing many of his best friends and Hollywood standing after he produced “The Nixon Years: Change Without Chaos.”

It’s a short Republican National Committee re-election blurb that Grasshoff said was just a job he’d been hired to do by Wolper Productions that isn’t even listed among his credits. But that didn’t matter to the blacklisters. Grasshoff had aided the Republican dark side and the price was the shun and the Hollywood cold shoulder started immediately, he said.

Lifelong friends no longer called and they did not return calls. Neither did they extend social invitations or accept his. Work was more nuanced. 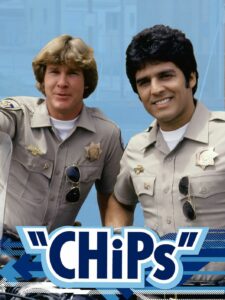 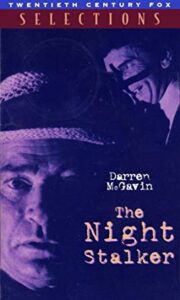 He got some gigs directing episodes of TV series like “CHiPs” and “Kolchak: The Night Stalker,” but he had to beg for it and work cheap, he said.

Meanwhile his big screen projects were politely dropped into those well known black holes after he was thanked for coming in — if he could get in at all.

Cynical me had doubts the repercussions could have been all that bad, but Grasshoff’s story was corroborated to me several times during later years. One of those was still livid that Grasshoff had betrayed his talent and “his people” (Jews). 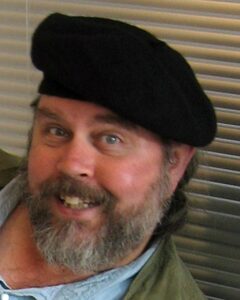 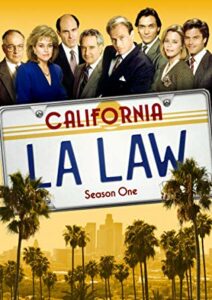 He says he was set to write an episode or more of the top rated “LA Law” series before penning an opinion piece for the Los Angeles Times that the LAL people considered the epitome of political incorrectness. 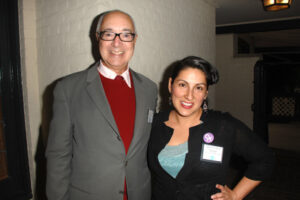 I first heard about that from Roger Lowenstein, a fellow ACLU Foundation board member and LA Law writer at an ACLU gathering in his Hancock Park home. Lowenstein is a former trial lawyer who got double execution style cop murderer Thomas Trantino released on the street. He also helped defend the Chicago 7. Of late, the admirer of Fidel Castro and Che Gueverra has founded what has been described as a private school for the indoctrination of inner city children in communist ideology.

Lowenstein mentioned no names, only that a promising young writer LA  was banking on had turned out to be a right-wing crazy and had been dropped and the word put out on the whisper network not to hire him. They at LAL were all very “disappointed” I recall him saying.

It wasn’t until several years later when I heard Neil tell his LAL experience story during a speech that it dawned on me that he was the great writing hope Lowenstein and the others had 86’ed.

But Neil is capable of telling his own story:
—–
In December 1991 I had a phone conversation with Alan Brennert, who as a producer on CBS’s The Twilight Zone had bought two scripts from me, including “Profile in Silver,” which was produced and aired on March 7, 1986. 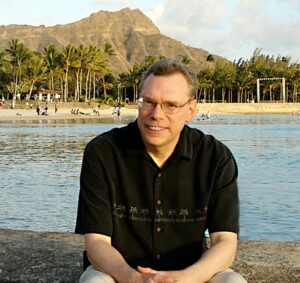 In December 1991 Alan was now Supervising Producer on LA Law. In the conversation Alan told me they were running short of “A” stories for the series — the “courtroom” stories. The “B” and “C” stories were ongoing personal stories involving the regular characters.

Over the next two weeks I faxed Alan a dozen one- or two-line descriptions for stories. I remember one of my proposed stories was about conjoined twins, one of whom was suing the other to prevent the highly-risky operation to separate them. Another was a story of a boy who had been kidnapped and raised by another family as a baby, recently returned to his birth family, who was suing to remain with the family that had raised him. (This plot idea was later used in the 1999 movie “The Deep End of the Ocean” based on the 1996 first novel by Jacquelyn Mitchard, and starring LA Law executive producer David E. Kelley‘s wife, Michelle Pfeiffer, but Alan Brennert told me Kelley had quit working in the LA Law offices as a producer in May 1991, six months before my submission. Kelley’s IMDb credits confirm this.)

After receiving this dozen story ideas from me, Alan told me the producing staff was thrilled with my submissions, and that about half of them were ideas that they hadn’t already done and were one’s worth doing. He said something to the effect that I was saving them. Since we were so close to the holidays nothing was going to happen until after the first of the year, but he assured me that he’d be bringing me in to discuss a script assignment in January, 1992.

(Some personal background here. In December 1991 my wife Kate and I were on the verge of a divorce. My last published book had come out hardcover in 1983 and my last book sales — paperback reprints of my two novels — had been in 1986 and 1987. My last sale to television had been at the end of 1986, a development deal for a TV movie for CBS that died with the six-month-long 1987 WGA strike.

Kate and I had moved to Southern California from Jersey City in 1989 so I could pursue more TV and film work because I wasn’t getting any benefit from being near to New York book publishers, and in December 1991 we were working as apartment managers in Venice and our daughter Soleil was six-months old. Money was extremely tight and I was receiving financial help from my parents. There were a number of issues between us, but my lack of employment in my profession — and stress on our relationship due to lack of money — were certainly big ones. I was still in love with Kate and asked for us to attend marital counseling, which we did for the next few months. I have always believed if I’d gotten the LA Law writing job I might have been able to save my marriage. As it was, we were divorced in 1992 and raised our daughter living at two different addresses.)

On January 1, 1992, my first Op-Ed sale to the Los Angeles Times was published. It was titled “A Massacre We Didn’t Hear About.” It’s reprinted in my 1993 book Stopping Power: Why 70 Million Americans Own Guns — currently being serialized on my blog J. Neil Schulman @ Rational Review.

That afternoon — Wednesday, January 1, 1992 — Alan Brennert was holding a New Year’s celebration at his house. I attended along with many of Alan’s other friends, and this included producers and writing staff from LA Law. Many of them had read my Op-Ed in that day’s Los Angeles Times, and many of them wanted to argue with me about it, whether or not I wanted to. But I was on the spot and some of them wanted to cut me a new asshole.

A couple of weeks went by and I’d been eagerly awaiting a call from Alan to come in to the LA Law offices for the meeting he’d told me they wanted to have with me. When the call never came I phoned Alan. Alan told me that they’d decided to go in another direction with the show, and wouldn’t be needing “A” courtroom stories, so there was no reason for me to come in.
That was the last I ever heard about it from Alan; but I will also say that after that January 1, 1992 party I was never again invited to Alan’s house for another social occasion with any of his other friends and industry colleagues — and Alan never again made any attempt to hire me on any show he worked staff on.

I concluded that I’d been blacklisted but I had no proof until I briefly told this story (omitting the name of the TV show and Alan’s name) at the Liberty Film Festival where Dan Gifford was on the Blacklisting panel, and came up to me afterwards to ask me if the show I was talking about was LA Law.”

—– And that is the way it passive aggressively goes when faded to Hollywood noir.

There’s no place to go in Tinseltown for proof of a blacklisting, as Gary Graham noted, unless you happen to be connected to the whisper network. I was for a time before committing crimes of political impertinence and still know stories I may yet tell when given permission. But for now, I must deduce new evidence of blacklisting like the rest of the disconnected from the stymied and broken careers of talented people who openly question or somehow run afoul of our dominant liberal litany.