Why Won’t the Media Cover the Black Panther Scandal?

…if called by a panther, don’t anther.

And that’s exactly what America’s liberal agenda-setting media has done. It has not answered the “New” Black Panther’s call daring it to report on voter intimidation by two paramilitary dressed Panthers, one of whom was brandishing a club, outside a Philadelphia polling place in 2008. 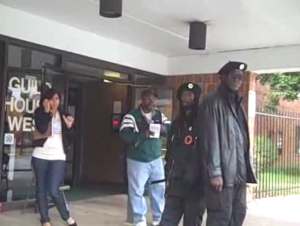 Ahhhhhhhhhhhh, yes. Ya gotta keep a close eye on those Jews whether at FOX or elsewhere!

Bartle Bull, a former civil rights lawyer and publisher of the leftist The Village Voice, a paper in which I have been published, said it’s “the most blatant form of voter intimidation I’ve ever seen.” Worse, our media agenda setters cower in silence behind their constitutional protection at the prospect of digging into the corroborated sworn testimony of Department of Justice whistle-blower Christian Adams that the Obama DOJ won’t prosecute those Panthers because it has embraced a politically correct policy of not charging blacks for civil rights violations.

Blacks, you see, cannot be racist or deny the civil rights of whites–or presumably those of any other race–because of their history of oppression in America, according to the politically correct dictum Marxist political science professor Herbert Marcuse embedded in the minds of our liberal intelligentsia during the ’60s. That’s important because the agenda-setting media is controlled by those politically correct elite. “Agenda-setting media,” by the way, is Marxist MIT linguistics professor Noam Chomsky’s term for that portion of media that have a large influence on public opinion and public policy by their choice of stories, the language and images used to tell those stories.

So when Bob Schieffer devoted all of his recent CBS Face the Nation time to an interview with U.S. Attorney General Eric Holder, the subject of the Obama Justice Department’s refusal to pursue the Black Panther voter intimidation case against King Samir Shabazz, the thug with the club, didn’t even come up. Neither did any questions about Christian Adams’ charges of racial bias at the DOJ.

That’s propaganda by omission and it’s far from the only example.

Ask Yahoo! Answers about its absence of Panther voting scandal information and you’ll find some gobbledygook about "community standards."

Wouldn’t you love to know what those community guidelines are?

Yeah, guess we all missed something.

Maybe those FOX Jews snuck a quick one past us.

Ask a liberal news guy like Ellis Henican on Fox News Watch that question and he weasels with agility: “Every organization has somebody that gets out of line.”

Lemme understand this: A poll observer says the Panther pair “physically attempted to block me” and reported that a group of elderly ladies walked away without voting on seeing the pair and Powers dismisses it all as a joke? As FOX News’ Megyn Kelly told Powers yesterday when discussing the Panther matter, “You don’t seem to know what you’re talking about.”

Why did the Lord give us agility,

If not to evade responsibility?

A multi-syllabic word meaning obligation and reliability and dependability that when applied to the Fourth Estate means a duty to determine the facts of a story as nearly as possible and report them so that the public has accurate information with which to make informed decisions. At least that’s my definition of journalism.

Simple, yes? But like the meaning of “is” as famously parsed by Bill Clinton, the meaning of responsibility when applied to journalism is, shall we say, flexible.

Do remember that those of present reticence where oh so voluble about their journalistic responsibility that, in the absence of any evidence whatever, they created a national racial incident by reporting ad infinitum that a Tea Party person had called a member of the Congressional Black Caucus the “n-word.” Please also recall MSNBC’s Contessa Brewer hyperventilation:

“A man at a pro-health care reform rally…wore a semiautomatic assault rifle on his shoulder and a pistol on his hip….there are questions about whether this has racial overtones….white people showing up with guns.” Video of the legal rifle carrier in Phoenix attending that gathering to hear an Obama speech had been edited by MSNBC so viewers could not see that he was black. Remember? 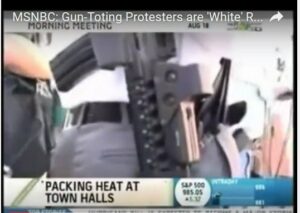 Here's the tight shot claimed to be of a white guy threat to Obama. 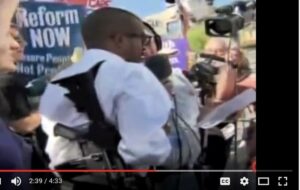 But on a wide shot that wasn't shown, we see the "white guy" has become a black guy.

So why do our journalistic posers do things like that?

"The mainstream press is liberal… Since the civil rights and women’s movements, the culture wars and Watergate, the press corps at such institutions as the Washington Post, ABC-NBC-CBS News, the NYT, the Wall Street Journal, Time, Newsweek, the Los Angeles Times, the Boston Globe, etc. is composed in large part of “new or “creative” class members of the liberal elite — well-educated men and women who tend to favor abortion rights, women’s rights, civil rights, and gay rights. In the main, they find such figures as Bill O’Reilly, Glenn Beck, Sean Hannity, Pat Robertson, or Jerry Falwell beneath contempt."

Adds Washington Post “Book World” editor Marie Arana, “If you work here, you must be one of us. You must be liberal, progressive, a Democrat… we wear liberalism on our sleeve and are intolerant of other lifestyles and opinions.” Except for Black Panthers “new” or old.

For them, there is a perverted tolerance. It’s an oddly amalgamated fear of blacks and fear of appearing intolerant to blacks, I have found, which is based in radical chicness. You recall Radical Chic, it’s novelist Tom Wolfe’s term for a convoluted practice he describes as “the pretentious and fashionable adoption of radical political causes by celebrities [which includes nationally known news and opinion personages], socialites, and high society… because it is the fashionable, au courant way to be seen in moneyed, name-conscious Society.” Wolf coined radical chic to specifically describe the 60s “old” Black Panther fundraiser held by New York Philharmonic conductor Leonard Bernstein and a bunch of his rich Manhattan friends even though the Panthers said they’d kill rich, white, and especially Jewish people like they were if they ever got real political power. Think of radical chic as an absurd tolerance of the media poltroons worthy of a psychiatric disorder designation.

I often wonder which is mine:

Tolerance, or a rubber spine?