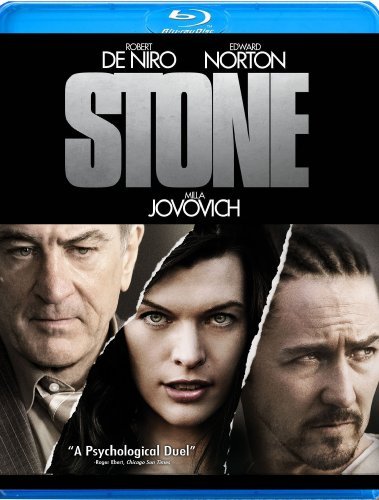 If there’s one thing many criminals do well, it’s instinctively spot another’s inner demons and then mess with their minds to exploit them. In “Stone” (in theaters now), that street psychologist is the incarcerated arsonist Gerald “Stone” Creeson (Edward Norton) and his prey is Jack Maybrey (Robert De Niro), the prison parole officer who will decide whether Stone gets out early or stays in the bar hotel for his full stretch. 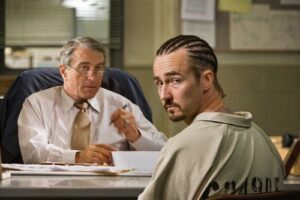 “John told me we have to do this film now while things are bad,” Norton said. “We have to show that traditional establishments like religion and marriage that people have relied on for truth have failed them.” Curran does that by showing those institutions as hypocrisies that are the refuge of hypocrites like Maybrey, a deeply flawed, nasty man who, in his heart, may be little better than the convicts he judges for early release.

A flashback prologue shows young Maybrey sitting in a Lazy Boy and sipping whiskey while watching golf on TV. When his wife says she’s leaving because “you imprison my soul” amid the buzz of a metaphorical angry bee swarm, Maybrey threatens to kill their baby daughter unless she promises to stay. She does.

Thirty years later, Maybrey is still sipping whiskey in the same Lazy Boy and watching golf on the same TV — at least when he and his wife (Frances Conroy) aren’t attending Episcopalian church services and reading Bible verses to each other. In his car, in one of the believability disconnects that betray the Curran/MacLachlan agenda, Maybrey augments those passages by listening to the kind of “Brother Al’s Hellfire and Brimstone Belchin’ Beat the Hades Outa Beelzebub’s Sneaky Serpent Send Me Yo Money Church of the Almighty Me” radio that no High Whiskeypalian (whenever four are gathered in His name, there is a fifth) that I ever encountered during my years in that church would sit through.

At his office in the same Michigan prison where The Jaundiced Eye, a Nonny de la Peña directed documentary I produced back in 1999, was filmed when it was an active hoosegow, Maybrey deals with Stone, his last case before retirement. During their banter, the repressed frustration of Maybrey’s passionless marriage is detected by Stone and he starts a trash talk narrative about the sexual acts his wife (Milla Jovovich) performs for him. 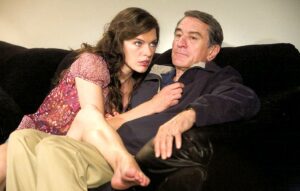 Stone picks up on the tells that he’s right, sics his screw-anyone spouse on Maybrey, and before long he’s in bed with her and open to blackmail if he does not recommend release of Stone, a man he now realizes is a whacko and clear danger to society. But it’s too late. The judgee has brought the judge down to street level. “My wife told me you fucked her,” as if that’s not what he planned. “See you on the bricks, Jack,” Stone tells the former “Mr. Maybrey” as he leaves prison.

That close call with public ruin at least motivates Maybrey to ask a question that many in the audience would probably like to pose: “Do you actually believe any of this stuff?” Maybrey asks his wife during one of their Bible readings. Conroy’s face says it all: “I’m tired. I’m tired of this charade, and I’m tired of this crutch and I want out.” 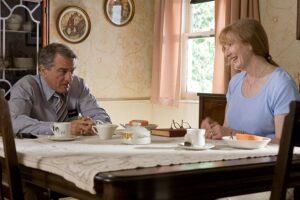 Viewers expecting some sort of positive epiphany at that point will do better waiting for Godot.

Stone wanders off into some sort of new age (at least that’s all I can figure it to be) alternate reality he’s concocted in his mind from a book he read in the pen while Maybrey is left to ponder what a profane, SOB he’s been all his life while holding a gun in his hand.

Does he end it all?

No ending-giver here, but as Mabrey’s grown daughter tells her mother at the close: “I can’t believe you took it for so long.”