No. Laws against gun carry in Dodge City and Tombstone were about disarming political and crime rivals, not public safety 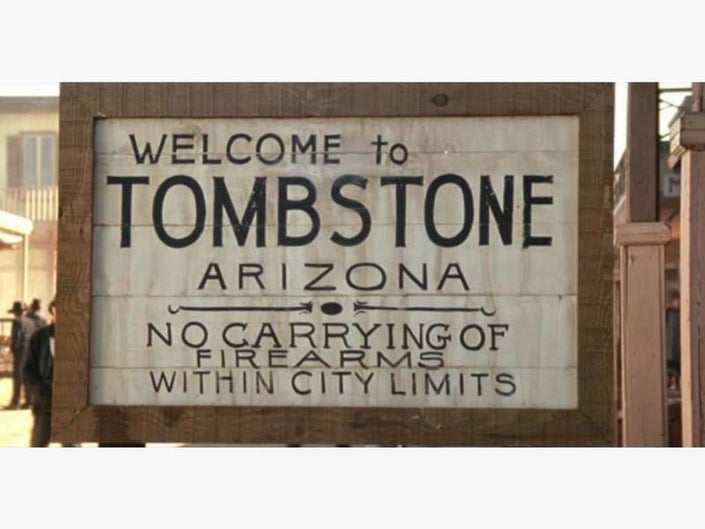 Few things made my father's parents laugh like Hollywood westerns and the myths on which they were based. Their laughter was grounded in mutual bona fides. Both had lived the real wild West as opposed to the reel movie and TV fiction of daily quick draw shoot-outs between white hats and black hats followed by happy endings.

Granddad, nicknamed "Montana Jack" for his ranch hand time there, was a teen Tombstone mine worker in 1880 who knew the Earps and their crew because his cousin Eli was an Arizona Territory Deputy US Marshal, gambler and Tucson saloon owner who shared ownership of some race horses with Wyatt. 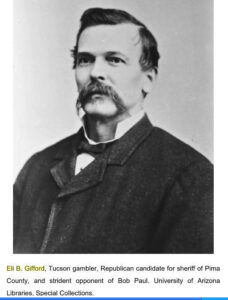 Grandmother was part Comanche from the rape of her grandmother by raiders before they were killed. Her father and uncle, Peter Corn and Lee, were seasoned Indian and outlaw fighting Texas Rangers along with their four brothers. After moving from Texas to New Mexico Territory (NMT) after the Civil War, another uncle, former Ranger Jasper Corn, became a Lincoln County deputy sheriff under Pat Garrett, the man famous for allegedly killing Billy the Kid. Jasper was killed in an ambush in Las Vegas, NMT when it was dominated by the infamous Dodge City Gang of gunfighters, gamblers pimps and robbers that had moved in from Kansas to exploit the new boomtown. While one part of her large family helped found Roswell, her parents settled near Seven Rivers when it was a haven for outlaws, gamblers and shootists. She knew the difference between the mythical Pat Garrett with the steady gun hand and the real shaky handed Garret the drunk who was barely sober enough to finish the adobe structures he had contracted to build on her family ranch. 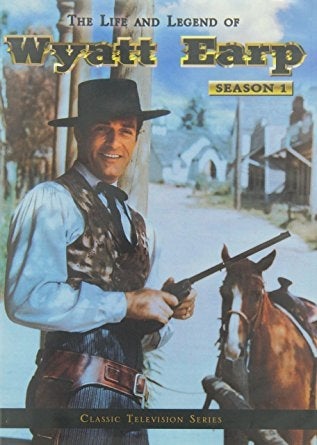 So when actor Hugh O'Brian's Wyatt Earp -- the lawman indelibly associated with frontier gun control in the public mind -- was shown clubbing some gun carrier with his 12 inch barreled "Buntline Special" Colt .45 in zealous enforcement of the Dodge City or Tombstone gun carry ban on TV's The Life and Legend of Wyatt Earp, the chortling started -- and not just about the action.

Grandfather knew Earp didn't have a long barreled Colt gifted to him by 19th century pulp novel writer Ned Buntline despite the fact that its existence was an article of absolute faith then among western lore aficionados.

Chortles could turn to ribald laughter if O'Brian delivered a lecture about gun carry endangering the public or the importance of obeying the law. When that action played out against the show's theme song that said "Wyatt cleaned-up the wild West country and made law and order prevail." They gotta be talking about somebody else or some other town, he'd say, before noting that Tombstone Marshal Virgil Earp saw plenty of people like his undeputized brothers and Doc Holiday illegally carrying guns in town and could not have cared less.

The reason was that enforcement of the anti carry ordinances in Tombstone and Dodge City and other frontier towns like Deadwood, South Dakota that had them were highly selective. In Tombstone, those friendly with the Earps and their buddies got a pass. In Dodge City those friendly with the powers that be and or the Dodge City Gang -- which included Wyatt when there -- got a pass too on the side of Dodge with the carry ban. That "side" is a rarely mentioned fact. 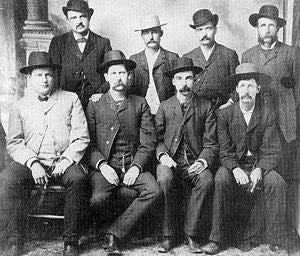 Dodge City was actually two towns, one incorporated the other not, controlled by warring political factions that almost went to shooting at each other. That close call brought together the above group of the day's most famous -- or infamous -- gunmen like Bat Masterson and Wyatt Earp to back the Dodge City Gang. The other side backed down. The two Dodges were separated by railroad tracks known as the Dead Line that ran down the middle of Front Street, it's main drag. 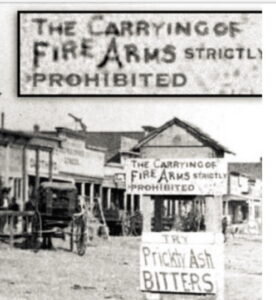 The famous sign above reading "The carrying of Firearms Strictly Prohibited" so often used to promote similar laws today was at the entrance to the North incorporated portion where the "decent" Dodge permanent residents sought to exclude riffraff like the drovers and maintain a somewhat puritan lifestyle. Women were not allowed in saloons and singing or dancing was against the law. 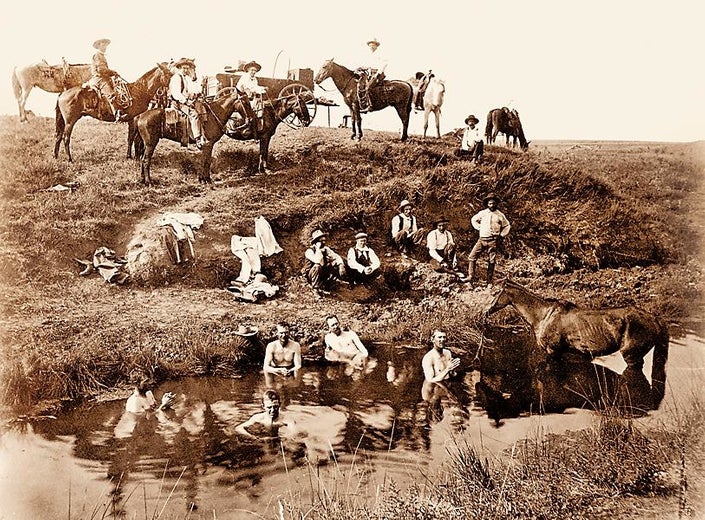 The cowboys and other undesirables were supposed to stay below the Deadline according to Wyatt Earp in the book The Old West in Fact and Film: History Versus Hollywood. "Below the deadline, as far as the marshals force was concerned, almost anything went, and a man could get away with gun play if he wasn't too careless about lead. North of the railroad, gun toting was justification for shooting on site, if an officer was so inclined, and meant certain arrest."

Sounds like cut no slack enforcement, but there are simply too many accounts of gun carry on the North side to believe Earp's account was anything other than his famed self promoting hyperbole. More on that down the page, but one example is the 1879 gunfight in the Long Branch Saloon between gamblers Frank Loving and Levi Richardson. Loving killed Richardson and a magistrate ruled the killing justifiable self defense. Even so, why was he not charged with illegal gun carry?

Possibly because Dodge's no carry law and other like it elsewhere were not put on the books for public safety reasons as anti-Second Amendment activists claim today in the many stories with titles like these:

*Even the Old West had gun control | TheHill

*Gun laws were actually stricter then than now - Daily Kos

Those headlines only represent partial truths in that while some frontier towns did enact ordinances against the carrying of weapons in town, they were enacted during a period when the Bill of Rights did not apply to the states. If a town wanted to ban a book, a play, a song or a newspaper story, it could.

Old guys like me can remember almost nobody questioned the banning of pop songs like the Everly Brothers' hit Wake Up Little Susie in 1956 in many places or books like Peyton Place until 1971 and For Whom the Bell Tolls until the 1970s plus many others.

Considering that the powers that be in places like Tombstone, Dodge City, Deadwood, South Dakota and many other frontier towns tended to be the saloon owners, gamblers and pimps -- like the Earps -- that often started the towns and provided the draws that kept money flowing in, business competition from outsiders with guns wanting either a piece or all of their action was something they did not want. That is why the real reason for Tombstone's anti weapon carry ordinance was to disarm those who wanted to muscle in on the gambling, prostitution, liquor, extortion and robbery profits from which those in power got a cut, according to my grandfather and other old guys in and around his Globe - Miami, Arizona home I met who had been in Tombstone during the Earp's reign.

Their reign could have ended abruptly, wrote Roger Jay in Wild West magazine, had the Tombstone "Gambler's War" turned out differently: "It raged during the fall and winter of 1880-81, and if the Earp brothers and Doc Holliday had lost it, they'd have had no choice but to clear out of Tombstone, Arizona Territory. The blood feud with the Sheriff John Behan–Cowboy faction would never have happened.

*No The Life and Legend of Wyatt Earp TV series starring Hugh O'Brian.

"The rivals in Tombstone's 'Gamblers' War' were the 'Slopers,' sporting men who had operated on the Pacific Coast, in and around San Francisco and the mining camps of the Sierra Nevadas — Aurora, Bodie, Virginia City — and the 'Easterners,' men who in the 1870s had run the faro layouts, keno rooms and poker games at the end of the cattle trails in Kansas, the beginning of the trails in Texas and points in between.

The Earps and Holliday were prominent Easterners." The Earps were also prominent Republicans and Civil War Union backers while the Cochise County Cowboys and Sheriff Behan were prominent Democrats and Confederate sympathizers. Even so, the two factions were strange bedfellow partners in crime whose disagreements were the real cause of their OK Coral gun battle, according to then sheriff Johnny Behan, in this December 7, 1897 Washington Post interview: "The Clanton brothers and the McLowrys were a tough lot of rustlers who were the main perpetrators of the rascally rife in that region. Between them and Earps rose a bitter feud over the division of the proceeds of the looting. The Earp boys believed they had failed to get a fair divide of the booty and swore vengeance. They caught their former allies in Tombstone unarmed and shot three of them dead while their hands were uplifted. They were hauled up before a Justice of the Peace... Warrants were issued for their arrest, and, summoning a posse, I went out to bring the Earps in. They were chased entirely out of the country and Tombstone knew them no more."

Though it be probable heresy to many, the straight arrow lawman image of Wyatt portrayed by O'Brian and many other actors in films and TV shows was an invention of 19th century writer Ned Buntline and the self promotion of Wyatt and his wife to writer Stuart N. Lake. Lake's 1930s book, Wyatt Earp: Frontier Marshal. Wyatt and his wife pressured Lake to write what they wanted that made them look best and it was those accounts that established many unchallengeable myths about Wyatt that were actually fabrications -- and not just about Wyatt.

His close friend Doc Holliday was far worse than depicted in legend and film according to descriptions of him at the time like this one in the July 20, 1881 issue of The Las Vegas Optic (Las Vegas NMT): "A shiftless, bagged-legged character - a killer and professional cut-throat and not a wit too refined to rob stages or even steal sheep."

Holiday was rumored to have robbed a stage outside Tombstone and murdered its driver, among other crimes. It's worth remembering that when Wyatt, the man "who made law and order prevail," traveled with Doc Holliday to Colorado, he was abetting Doc's escape from a murder warrant for which Arizona sought Doc's extradition. But what are a few inconvenient historical facts when social and political agendas can be justified by historical fabrications?

And that's exactly what the myth of wild west gun control, as framed by those who want it to be so in order to achieve their goals today, happens to be. In short, we are following the advice given in the film The Man Who Shot Liberty Valance that is a sure way to undermine sane public policy: "This is the West, sir. When the legend becomes fact, print the legend."