The Uplifters Try It Again

Elitist schemes to eliminate or narrow constitutional rights are nothing new 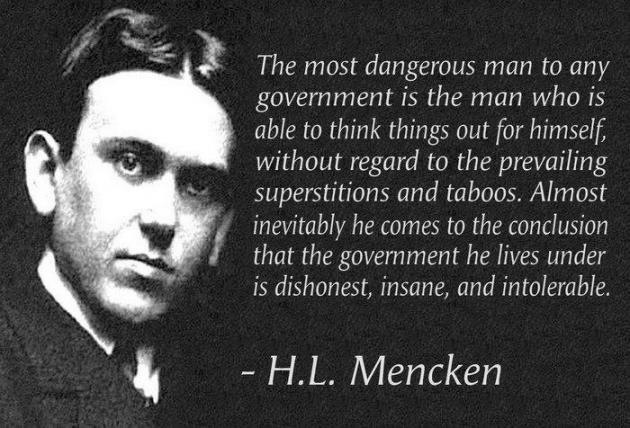 H.L. Mencken (1880-1956) was at the top of the list of the most influential newspaperman and common man thinkers of his era. His books and essays were iconoclastic and emphasized individual thought and responsibility as opposed to the group think of elitist academics, politicians and Bible thumpers.

Mencken was one of my inspirations for getting into the news biz while a high schooler in Baltimore, Mencken's home, and this essay is an example why.

This is reprinted from The Evening Sun of Baltimore, November 30, 1925.

The eminent Nation announces with relish “the organization of a national committee of 100 to induce Congress to prohibit the inter-State traffic in revolvers,” and offers the pious judgement that it is “a step forward.” “Crime statistics,” it appears, “show that 90% of the murders that take place are committed by the use of the pistol, and every year there are hundreds of cases of accidental homicide because someone did not know that his revolver was loaded.” The new law—or is it to be a constitutional amendment?—will do away with all that. “It will not be easy,” of course, “to draw a law that will permit exceptions for public officers and bank guards”—to say nothing of Prohibition agents and other such legalized murderers. “But soon even these officials may get on without revolvers.”

More than once, in this place, I have lavished high praise upon the Nation. All that praise has been deserved, and I am by no means disposed to go back on it. The Nation is one of the few honest and intelligent periodicals ever published in the United States. It stands clear of official buncombe; it prints every week a great mass of news that the newspapers seem to miss; it interprets that news with a freedom and a sagacity that few newspaper editors can even so much as imagine. If it shut up shop then the country would plunge almost unchallenged into the lowest depths of Coolidgism, Rotarianism, Stantaquaism and other such bilge. It has been, for a decade past, the chief consolation of the small and forlorn minority of civilized Americans.

But the Nation, in its days, has been a Liberal organ, and its old follies die hard. Ever and anon, in the midst of its most eloquent and effective pleas for Liberty, its eye wanders weakly toward Law. At such moments the old lust to lift ‘em up overcomes it, and it makes a brilliant and melodramatic ass of itself. Such a moment was upon it when it printed the paragraph that I have quoted. Into that paragraph—of not over 200 words—it packed as much maudlin and nonsensical blather, as much idiotic reasoning and banal moralizing, as Dr. Coolidge gets into a speech of two hours’ length.

The new law that it advocated, indeed, is one of the most absurd specimens of jackass legislation ever heard of, even in this paradise of legislative donkeyism. Its single and sole effect would be to exaggerate enormously all of the evils it proposes to put down. It would not take pistols out of the hands of rogues and fools; it would simply take them out of the hands of honest men. The gunman today has great advantages everywhere. He has artillery in his pocket, and he may assume that, in the large cities, at least two-thirds of his prospective victims are unarmed. But if the Nation’s proposed law (or amendment) were passed and enforced, he could assume safely that all of them were unarmed.

Here I do not indulge in theory. The hard facts are publicly on display in New York State, where a law of exactly the same tenor is already on the books—the so-called Sullivan Law. In order to get it there, of course, the Second Amendment had to be severely strained, but the uplifters advocated the straining unanimously, and to the tune of loud hosannas, and the courts, as usual, were willing to sign on the dotted line. It is now a dreadful felony in New York to “have or possess” a pistol. Even if one keeps it locked in a bureau drawer at home, one may be sent to the hoosegow for ten years. More, men who have done no more are frequently bumped off. The cops, suspecting a man, say, of political heresy, raid his house and look for copies of the Nation. They find none, and are thus baffled—but at the bottom of a trunk they do find a rusted and battered revolver. So he goes on trial for violating the Sullivan Law, and is presently being psychoanalyzed by the uplifters at Sing Sing.

With what result? With the general result that New York, even more than Chicago, is the heaven of footpads, hijackers, gunmen and all other such armed thugs. Their hands upon their pistols, they know that they are safe. Not one citizen out of a hundred that they tackle is armed for getting a license to keep a revolver is a difficult business, and carrying one without it is more dangerous than submitting to robbery. So the gunmen flourish and give humble thanks to God. Like the bootleggers, they are hot and unanimous for Law Enforcement.

To all this, of course, the uplifters have a ready answer. (At having ready answers, indeed, they always shine!) The New York thugs, they say, are armed to the teeth because New Jersey and Connecticut lack Sullivan Laws. When one of them wants a revolver all he has to do is to cross the river or take a short trolley trip. Or, to quote the Nation, he may “simply remit to one of the large firms which advertise the sale of their weapons by mail.” The remedy is the usual dose: More law. Congress is besought to “prohibit the inter-State traffic in revolvers, especially to bar them from the mails.”

It is all very familiar, and very depressing. Find me a man so vast an imbecile that he seriously believes that this prohibition would work. What would become of the millions of revolvers already in the hands of the American people if not in New York, then at least everywhere else? (I own two and my brother owns at least a dozen, though neither of us has fired one since the close of the Liberty Loan drives.) Would the cops at once confiscate this immense stock, or would it tend to concentrate in the hands of the criminal classes? If they attempted confiscation, how would they get my two revolvers—lawfully acquired and possessed—without breaking into my house? Would I wait for them docilely—or would I sell out, in anticipation, to the nearest pistol bootlegger?

The first effect of the enactment of such a law, obviously, would be to make the market price of all small arms rise sharply. A pistol which is now worth, second-hand, perhaps $2, would quickly reach a value of $10 or even $20. This is not theorizing; we have had plenty of experience with gin. Well, imagining such prices to prevail, would the generality of men surrender their weapons to the Polizei, or would they sell them to the bootleggers? And if they sold them to the bootleggers, what would become of them in the end: would they fall into the hands of honest men or into the hands of rogues?
IV

But the gunmen, I take it, would not suffer from the high cost of artillery for long. The moment the price got really attractive, the cops themselves would begin to sell their pistols, and with them the whole corps of Prohibition blacklegs, private detectives, deputy sheriffs, and other such scoundrels. And smuggling, as in the case of alcoholic beverages, would become an organized industry, large in scale and lordly in profits. Imagine the supplies that would pour over the long Canadian and Mexican borders! And into every port on every incoming ship!

Certainly, the history of the attempt to enforce Prohibition should give even uplifters pause. A case of whisky is a bulky object. It must be transported on a truck. It can not be disguised. Yet in every American city today a case of whisky may be bought almost as readily as a pair of shoes despite all the armed guards along the Canadian border, and all the guard ships off the ports, and all the raiding, snooping and murdering everywhere else. Thus the camel gets in and yet the proponents of the new anti-pistol law tell us that they will catch the gnat! Go whisper it to the Marines!

Such a law, indeed, would simply make gun-toting swagger and fashionable, as Prohibition has made guzzling swagger and fashionable. When I was a youngster there were no Prohibition agents; hence I never so much as drank a glass of beer until I was nearly 19. Today, Law Enforcement is the eighth sacrament and the Methodist Board of Temperance, Prohibition and Public Morals by itself authority for the sad news that the young of the land are full of gin. I remember, in my youth, a time when the cops tried to prohibit the game of catty. At once every boy in Baltimore consecrated his whole time and energy to it. Finally, the cops gave up their crusade. Almost instantly catty disappeared.

The real victim of moral legislation is always the honest, law-abiding, well-meaning citizen—what the late William Graham Summer called the Forgotten Man. Prohibition makes it impossible for him to take a harmless drink, cheaply and in a decent manner. In the same way the Harrison Act puts heavy burdens upon the physician who has need of prescribing narcotic drugs for a patient, honestly and for good ends. But the drunkard still gets all the alcohol that he can hold, and the drug addict is still full of morphine and cocaine. By precisely the same route the Nation’s new law would deprive the reputable citizen of the arms he needs for protection, and hand them over to the rogues that he needs protection against.

Ten or fifteen years ago there was an epidemic of suicide by bichloride of mercury tablets. At once the uplifters proposed laws forbidding their sale, and such laws are now in force in many States, including New York. The consequences are classical. A New Yorker, desiring to lay in an antiseptic for household use, is deprived of the cheapest, most convenient and most effective. And the suicide rate in New York, as elsewhere, is still steadily rising.