The NRA Needs a New Face

The messenger matters. And Wayne LaPierre, Dana Loesch and gloating elephant hunters are the wrong messengers for today. 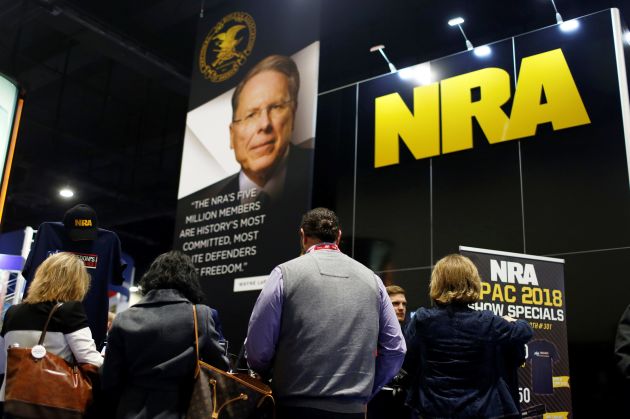 There's simply no other way to say what must be said about the National Rifle Association's current predicament. In sum, the NRA's financial and public relations (PR) ailments are so glaringly plain it's difficult to understand how they could have been allowed to happen or continue sans something akin to criminal intent. Phrased another way, it appears a number of top executives have turned the NRA into a cult of personality gravy train on which they are livin' rather large. 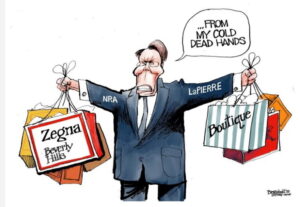 As an award winning former network investigative reporter specializing in financial fraud and official corruption, I'd noticed the red flags of corruption like high executive lifestyles and arrogance years before having my suspicions confirmed by political media consultants like Roger Stone and his late partner, Greg Stevens. Their insider information confirmed the NRA had become a cult of personality that allowed Executive Director Wayne LaPierre to lie to the NRA board and soak the organization for the benefit of himself and his buddies at the NRA's advertising and PR firm, Ackerman-McQueen (AQ). 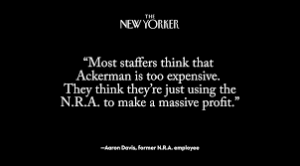 The NRA board had told LaPierre to end the relationship with AQ during the mid 1990s after catching the scent of gross AQ overcharges and other corruptions. So LaPierre literally did as told. He dropped AQ and hired the Mercury Group (MG) advertising agency. What he didn't tell the board was that MG was wholly owned by AQ. Later, at the behest of some NRA board members, I mentioned that duplicity in publications such as Chronicles. Chicanery of that sort is potentially ruinous to the NRA's tax-exempt status existence and possibly its existence at all.

Technically, the NRA's present money problems are the result of fund raising shortfalls. But it's the NRA's own bloated to corruption level executive salaries, perks and unconscionable payment of AQ's high fees that have made the NRA's massive robo call campaigns and discounted memberships necessary as a way to acquire cash. The result is an NRA that is a classic case of ye olde teeter totter money rhyme that when one's outgo exceeds one's income, one's upkeep becomes one's downfall. The NRA's income is further pinched by hostile government and activist actions. All that and more is now being chewed over and possibly resolved by litigation and legislation.

Other issues regarding the face the NRA presents to the public need to be resolved by its 76 member board. That's way too large a body, in my opinion, for effective association governance of any NRA money corruptions or its boneheaded public relations practices that have created nigh impossible to change negative public perceptions that are the stuff of Saturday Night Live mockery.

Among the many examples, there was the NRA TV episode that showed its AQ public relations strategist, Tony Makris, shoot an elephant in the face and then toast the kill with champaign. The champaign toast has apparently been scrubbed from the internet leaving only great white hunter Makris (left) and his guide proudly standing by the dead pachyderm. Public outrage canceled the TV show but the anger continues. It's a classic example of NRA cultural tone deafness made worse by Makris' incomprehensible response. 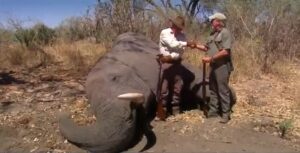 Makris said his critic's outrage was a “very unique form of animal racism” akin to Hitler's racial doctrine. "[T]hey said but [elephants are] so big and special and they're smarter," Makris said. "And I went, you know, Hitler would have said the same thing."

In another example of NRA convoluted thought, association spokesperson Dana Loesche dressed Thomas the Tank Engine, the children's cartoon character, in Ku Klux Klan robes on her NRATV show to make a point that is equally as befuddling as Makris'. 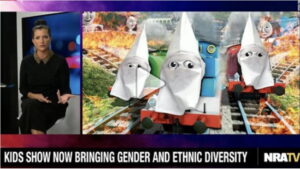 Loesch blasted "Thomas & Friends" for partnering with the United Nations to increase diversity on the program by introducing two new female characters, one of which was painted with an African-inspired face. She then showed them on screen wearing Ku Klux Klan hoods while on flaming train tracks. "That's where it gets really strange to me, said Loesch. "Am I to understand this entire time that Thomas and his trains were white? Because they all have gray faces. How do you bring ethnic diversity? I mean, they had to paint what I guess they thought was some sort of African pattern on the side of Nia's engine." 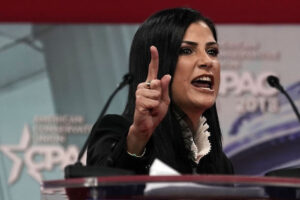 Loesch appeared as the NRA's spokesperson shortly after several association board members had asked me for suggestions about shaping up the NRA's media image. I don't know if my points for a new spokesperson had anything to do with her hiring or whether it was the fact that she's a good looking woman someone at AQ, her actual employer, was smitten with. If that's it, it's a whole lotta smitten since she's paid over a million per year by AQ, according to published accounts. Whatever the reason she was hired, Loesch is the wrong face for the NRA in today's culture. So is Wayne LaPierre. 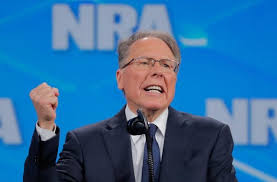 The right face for the NRA is one that doesn't fit LaPierre's pop culture stereotype of the angry white male nor his projected anger of insecurity. That latter one leads to a bit of favored Freudian sexual association smuggery anti-Second activists love to make.

I have never met LaPierre, but both times I saw him speak, he entered the room surrounded by men in blue blazers. He then left their protection to mount the stage where he gave an angry rant to the shilled cheers of his blazered entourage. When finished, he did what in my sideshow working days was called the walk of indignation into the protection of his blazered entourage which protected him from contact with attendees as it whisked him outta the room. Most have seen that walk shtick before without realizing it has several purposes. Those can range from shaming an audience into handing over more money to a faux intimidation to hide insecurity, which I suspect LaPierre has in large quantities.

LaPierre must be kept from public view if the NRA is to cease being an attackable lampoon and successfully advocate for a portion of the Constitution the American Civil Liberties Union (ACLU), on which I was a five year board member, foolishly won't defend. What is the face the NRA needs? Take a look at the faces of those responsible for the 2nd Amendment's major Supreme Court gains as an individual right equal to all others. 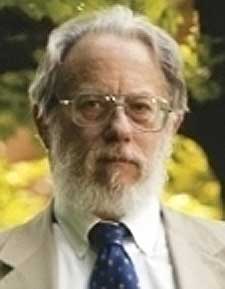 The late Don B. Kates was a civil rights attorney with radical lawyer William Kunstler and a former law professor. Kates was a "Freedom Rider" against segregation in Mississippi. Both he and his wife were arrested and suffered mightily in jail there. That background gave Kates the credibility with the liberal-left establishment that controls academia to shame its esteemed anti-Second law professors into admitting that the Second guarantees an individual right to guns with which to defend themselves against the sort of government tyranny blacks experienced. Thanks to Kates, many ivory tower eggheads saw the Second was an individual right that is as vital to American's scheme of individual freedom as the rest of the Constitution they defend. Because of Kates' efforts, those professors wrote law reviews that formed the intellectual foundation for future 2nd gains. 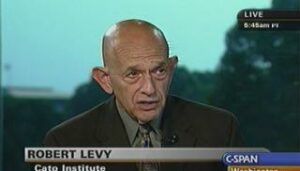 The big future gain came when PhD Robert Levy of the libertarian Cato Institute think tank got the case before the Supreme Court that established the 2nd Amendment as an individual right.

Both Kates and Levy had something going for them nobody I am aware of at the NRA has. They both had academic and street cred with the liberal-left establishment that controls academia and the media. Neither could be dismissed outright or falsely smeared as right wing, racist nut cases as can Loesch, Makris or LaPierre. that means none of them or anyone like them should be the face of the NRA if it really wants to protect Second Amendment and other constitutional rights.

The person the NRA should have as its face, as I have noted in other venues, is a person with serious civil libertarian academic cred and the institutional relationships that go with that. In addition, the NRA face should be one with the gravitas to hold center stage and have a sharp tongue to put down the disingenuous sophomoric commentary that characterizes so much anti Second sniping.

My choice would be a pro-Second British barrister (and yes, there are some) who is not overbearing, but who can weaponize both rhetoric and the natural deference we American colonists somehow feel toward our cousins from the mother country. In addition, this ideal NRA face should be capable of producing pointed op-eds and serious, academic quality prose about law and history in support of constitutional Rights -- particularly Rights as an interwoven barrier against the totalitarian desires of the politically powerful and clever. Finally, this face should be able to socialize in favored power centers and have the ability to make friends, and more friends, and still more friends.