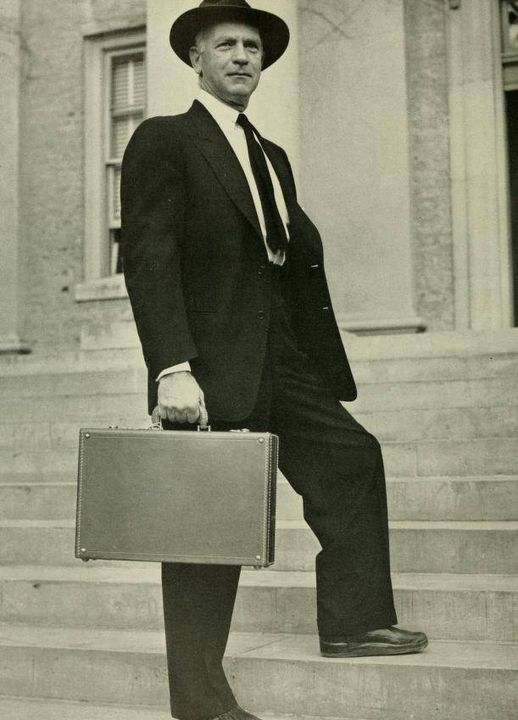 Since W.W.II weighs on our minds today, I thought it proper to mention a man who was largely responsible for our having the military gear to win it.

The man in this photo I took as a kid in my Chapel Hill, North Carolina hometown is University of North Carolina (UNC) statistics professor Harold Hotelling.

He lived down the street from us and his two sons and I raised hell all over town together.

However, we had to calm down at least once a month and be proper urchins at the "Hotelling Tea." That was a classic 4 PM British tea served in the Hotelling home that was attended by many of the brilliant minds from North Carolin's four major universities: UNC, Duke, Wake Forest and North Carolina State. Our orders were to circulate, engage in conversation and absorb knowledge and wisdom.

Must admit I had no idea how important a figure Dr. Hotelling was then or that I understand now the statistical work he pioneered that enabled our industries to organize and manufacture tanks, planes and ships faster than most anyone thought would have been possible. But my mother and lots of others at UNC understood Hotelling's importance.

Both Hotelling and my mother were founders of their respective schools at UNC -- nursing and public health for my mother and statistics for Hotelling.

Taking on faith what I have been told, because of the statistical models Hotelling formulated together with other like geeks, Henry Kaiser's shipyards were able to get the production time for Liberty Ships down from 365 days to 92, 62, and, finally, to one day.

That should not diminish the role of Kaiser himself since he innovated many practices that made that fast production possible. But I am told that may not have been possible without the statistics of efficiency that conserved raw materials and focused societal efforts where it was most needed in what was known as Hotelling’s theory of “spatial economics” in which he identified Space as not just a barrier to moving goods around, but rather a field upon which competitors jostled to be nearest to their customers.

The only reference I can readily find to any of that is this comment about him in a North Carolina State publication: "During World War II, along side Wilson Allen Wallis, an American economist and statistician, and Jacob Wolfowitz, a Polish-born American statistician, Hotelling worked as a charter member of the Statistical Research Group and contributed his statistical expertise to the war effort."

Some of Hotelling's contributions include ...

Hotelling's T-squared distribution which is a generalization of the T-distribution in multivariate setting, and its use in statistical hypothesis testing and confidence regions. He also introduced canonical correlation analysis.

Then there's Hotelling's law, Hotelling's lemma, and Hotelling's rule in economics, market socialism and Georgism in which Hotelling made pioneering studies of non-convexity in economics.  But that's not all.  Hotelling also developed and named the principal component analysis method widely used in statistics and computer science.

Yeah, it's all over my head too despite my having graduated from what was at the time one of America's top advanced curriculum engineering and mathematics high schools, Baltimore Polytechnic Institute, and despite the fact my mother was a Johns Hopkins University professor and statistician geek who worked closely with the legendary statistical genius Sol Lilienfeld.

So while we cherish the sacrifices of the men who stormed the D-Day beach, we should also be aware that they had the equipment to carry that off thanks in large part to Professor Hotelling and others like him.