Is there a right of self defense against police? 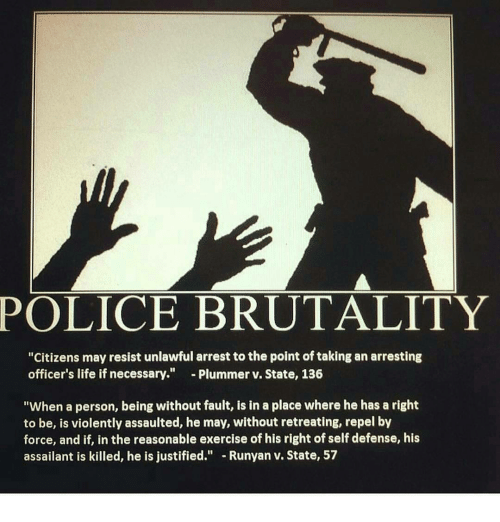 Criminals and murderers occasionally wear a badge. It happens in police departments all over the world. But does a badge make its wearer immune from acts of self defense -- even deadly self defense -- from those at risk of unjustified harm or death?

Imagine yourself in the place of the late Malice Wayne Green in Detroit. Your car is stopped by two plainclothes police officers at night. They call for backup and five more policemen arrive, one of them a sergeant. The two who stopped you then start viciously beating you on the head with their flashlights for no apparent reason while you are still in your car. They pull you out, handcuff you and continue beating. All the while, the other five officers watch, laugh and do nothing to stop it.

Whenever renegade or vigilante police abuse their authority -- especially to the point of murdering people -- we are looking at a complaint that concerns the very essence of what the colonists' fight with George III's thugs was about and what this country's laws and institutions were established to prevent. For as bad as gang violence and street crime are, the police state terror that abusive authority ultimately breeds is worse. It's a concern that used to get more attention.

Because of the legitimate fear of centralized police power, the FBI originally had no law enforcement (arrest) authority and its agents weren't allowed to carry firearms for a time even after gaining arrest powers. States and territories had the same fears. Many limited the size and authority of their own law enforcement agencies for the same reason.

Examples of abuse ranging from J. Edgar Hoover's blackmail and character assassinations of politicians and private citizens to those of governors and mayors using their state and local police forces as a terror tool are a testimony to the original concerns. So are rogue police.

I covered a considerable number of police abuses during my years as a television reporter (ABC News, Good Morning America, MacNeil-Lehrer News Hour, CNN, etc). A few of the abuses involved "throw down" weapons that Houston police commonly dropped by dead victims to justify killing an "armed" suspect. Others involved incidents of citizens killed by cops on anabolic steroids and cars of drunk off-duty police shooting at freeway motorists.

Through them all, the question of citizen self protection against rogue police remained an issue never addressed.

For, regardless of the community, the response was virtually the same. The "street police" would close ranks and keep a tight lip. The police "brass" would admit to some past "problems" with recruitment, training or supervision that had now been fixed. And some group would call for a civilian review board of one sort or another. Then the whole matter would disappear under the banner of "police support" until the next heinous incident.

This is a nasty subject. And talking about it in public isn't to be taken as a rallying cry or endorsement of trashing society's right to enforce just social order and peace by police action. Still, an individual's most basic right is the right to protect himself or herself from evil or dangerous people, including government or police officials who abuse their authority whom the system cannot or will not control.

That principle is among the oldest and most fundamental concepts of the English Common Law that American law is based upon. And its just application tops all laws and all arguments that would prevent its exercise.

That being the case, it would seem the essential question is how to reconcile the two positions of, on the one hand, having needed police authority, while on the other, allowing an individual to protect himself against that authority if and when it gets out of control with murderous intent.

I'd suspect that a consensus on the self defense action required while actually under attack would be relatively easy compared to the one implied in the "Cop Killer" controversy. Namely, a preemptive strike against criminal police before they attack. The questions are disturbing.

Should motorists stop their car for police on a dark or lonely street? For years, women's groups have said no. What protection and rights does the law give citizens against rogue police action? What should someone do when they see police abuse? Does 911 accept such calls? If so, how are they handled? Does the caller risk police retribution?

Don't say you weren't warned. This is the sort of subject none of us wants to think about. But if Malice Wayne Green can be beaten to death by the very men who were sworn to uphold the law, are we naive enough to think it couldn't happen to one of us?