"The Constitution should be taken like mountain whiskey: Undiluted and untaxed." 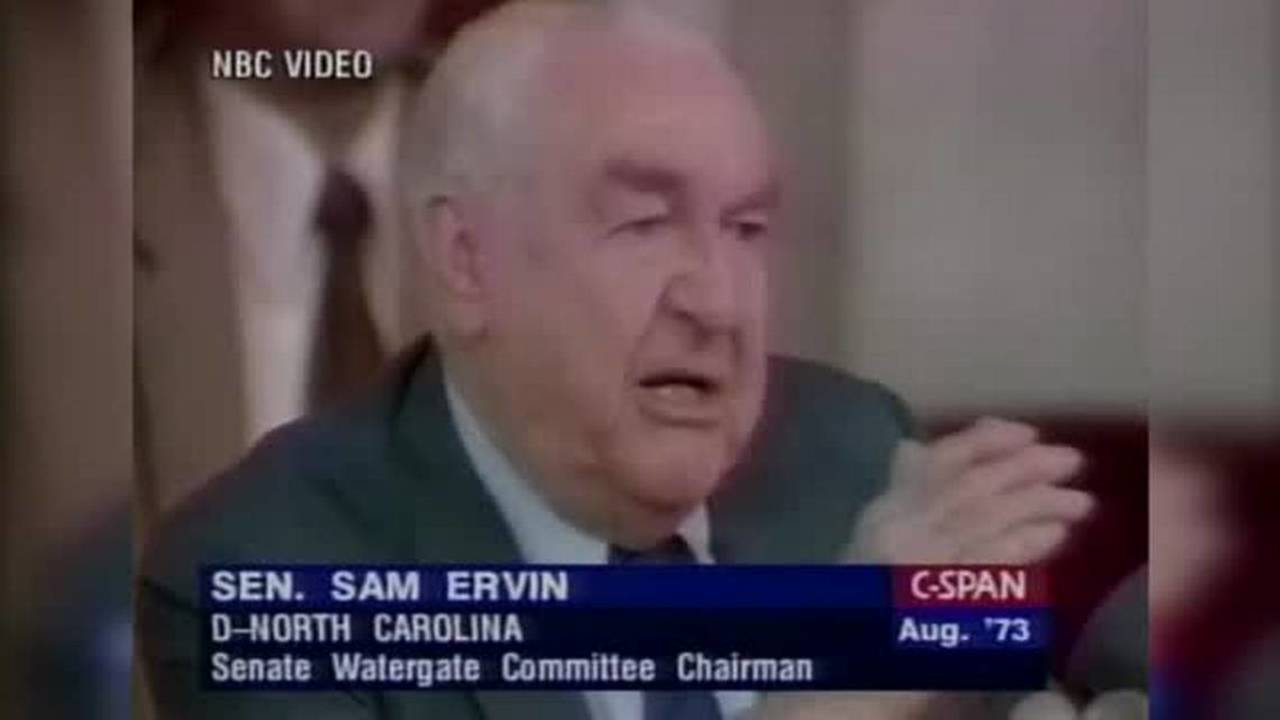 When retired North Carolina U.S. Senator Sam Ervin Jr. died nine years ago Saturday, a legacy of American Founding wisdom, humor, honor and constitutional integrity died with him. I didn't fully appreciate all that until I watched "Chairman Sam" untangle the Watergate lies and deceits of the Nixon gang. 'Til then, he remained one of the kindly geezers I met as a child while visiting my uncle, Andy Kistler, the mayor of Ervin's hometown of Morganton for many years.

Ervin would engage me with socratic questions about legal and political concepts that would get me thinking beyond my years. He'd then make those concepts understandable with corny country boy stories that imparted lessons about human nature and its negative proclivities our system of Anglo American law and Constitution were designed to control.

But the anniversary of his death isn't the only reason I think of him now. It's the pending opening on the Supreme Court -- the place he always wanted to be and deserved to be -- and the thought of the life he could have breathed into our dying Constitution, what Ervin called "the most precious instrument of government the world has ever known."

Dying? He'd think so. "The most precious value of of civilization is the freedom of the individual" is no longer a gospel universally heard or believed within the American congregation. The benevolent dictatorship of Singapore's Lee Kuan Yew is enticing to many. Faith in personal freedom doesn't always resound to the back pew "because the agnostics in this church aren't very good."

They'd get better with a Justice Ervin. Apostate rulings beware. "I've never taken an oath to support judicial aberrations."  Founding fundamentals would revive. This man for all seasons knew the road to hell. "Apart from the faithful observation of the Constitution by the president, the Congress and the Court, our country has no protection against tyranny," he'd say.

So draw near to the bar, all yea lawyers. Justice Sam's pourin' straight Constitution from his personal jug, distilled from the grain of the Founding fathers, aged in the wood of world experience, mellowed by common sense, warmed by compassion and country humor. Ervin believes "the Constitution should be taken like mountain whiskey: Undiluted and untaxed."

To lovers of freedom and justice, it goes down smooth and refreshes. To elitists and tyrants, its got a helluva bite, unsettles the system and leaves a lasting hangover. Either way, it doesn't intoxicate or bloat the ego.

"This iniquitous law is an affront to the Constitution, and as full of unconstitutional, unjust and unwise provisions, as a mangy hound dog is full of fleas!" Refreshing clarity for a Court decision? That rube admonition belied an honors Harvard law degree.

"Thank God, no one would ever suspect it," he'd say, and not only for the disarming advantage. He'd Harvarded way before a name professor or two "became educated beyond his intelligence" and convinced impressionable lawmakers the Constitution required massive legislation protecting everybody from everything. "It's better to be ignorant than to know what ain't so."

Civil rights was typical. "Rightly interpreted, the Constitution in its present form confers on all Americans of all races equality of constitutional and legal rights and forbids government to frustrate this constitutional objective by making race a criterion for bestowing rights or imposing burdens."

"Pass no more laws, and 'peal half those we've got" was excellent Ervin advice considering what followed.

Reverse discrimination, institutionalized poverty, crime and Gestapo police tactics against "law ridden" Americans are but some of the problems he predicted in opposing activists' contempt for traditions, individual responsibility, free markets and the systematic process of law.

"The preservation unimpaired of our basic rules of procedure is an end far more desirable than that of hurrying a single sinner to what may be his merited doom."

The Senator understood the test of good law is not whether it will accomplish its purpose if properly administered, but what damage it will do if improperly administered, he'd note -- especially in the case of expanded police powers that allowed police to break laws in order to enforce the law. "In other words, to capture criminals, the law enforcement agencies must act criminally -- a little law breaking does wonders for law and order." A ruining retort to some classic "get tough" abominations. Justice Ervin would no doubt weigh today's mentioned solutions in that balance.

Criminalization of speech to promote to promote sexual and racial political agendas? Censorship of movies and TV claimed to incite violence? Onerous gun control and expanded police search and seizure powers for public safety? A national identity card a a measure against illegal immigration? All "a giant step in the conversion of our free society into a police state."

When Tibet's Dalai Lama dies, a search is made for the person in whom his soul has been reborn. perhaps Sam Ervin's could be found. We've used worse methods to select Supreme Court justices.