Every picture tells a story and the one on the Seal of Union County, New Jersey tells a deadly one.

It depicts the 1780 cold blooded murder that ignited righteous anger of New Jerseyans and colonists at large and caused the fence sitters among them to take up arms against their own government, the British Crown. It's also a murder foolish contemporary politicians and activists seem determined to have repeated with their advocacy of "red flag laws" that allow government a pretext to send its armed agents to seize one's firearms and other property at gunpoint without much, if any, due process.

The seal scene shows a "Redcoat" -- a British soldier -- shooting a woman whose hands are raised in surrender. The name of the soldier isn't known, but the woman's is. She was Hannah Caldwell, wife of Presbyterian minister James Caldwell, widely known as "the fighting parson" for his spiritual leadership, sermons and writings in support of individual liberty and what we now call the American Revolution. That's not what King George III and his British and Hessian military officers called it, though. To them it was the "Presbyterian Rebellion." 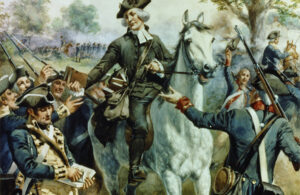 Caldwell's Presbyterianism was not the namby pamby variety of today. It was the "redneck" (English slang for Presbyterians then), undiluted anti-episcopacy Presbyterian polity variety that had fought a five year war along the border of Scotland and England against the Crown's demand that bishops be placed in the Scottish Presbyterian church. That bishopless Presbyterian polity that rejects top down hierarchy formed the basis for the relationship of the American states to the federal government and institutions such as the Electoral College. As such, Crown loyalists agitated for both Reverend Caldwell and his family to be arrested or made assassination targets of the Crown. Reverend Caldwell was murdered one year after his wife.

Unlike the seal picture, a witness said Hannah was actually in her bedroom shielding her children (one of whom is standing behind her) from a soldier who had left the ranks of a Hessian and British troop column led by General Baron Wilhelm von Knyphausen that was marching by to walk over to her house. Accounts of the time say she thought she'd be safe since she was friends with many British officers and had even hosted a tea for several at her home earlier that day. If that sounds odd, it's because on paper, the etiquette of civilized warfare among European armies then forbid atrocities against non belligerent women and children. That's on paper. In practice, rape by soldiers -- especially gang rape -- was used as a weapon of terror by British and Hessians alike.

So according to the manners of period warfare, Hannah's murder was considered beyond the pale. Historian Charles Shallcross says "it was a terrible shock to the public and it galvanized them against the British." It certainly strengthened the resolve of my war ancestors like Captain William Gifford of the Third New Jersey Regiment. 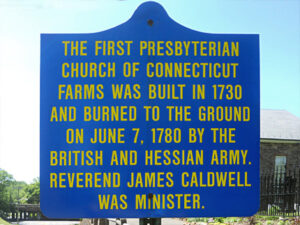 His resolve and that of others was doubled after Hannah's murder by the actions of General von Knyphausen's troops at nearby Elizabeth, New Jersey. They had orders to search the town for rebels and guns. During that process, the Hessians became a mob that fought among themselves for looted valuables before setting fire to the houses, town buildings and church. People then remembered that. Those in Union County still do and so should we because that looting, property destruction and murder of Hannah Caldwell hold lessons today about red flag laws for those "woke" enough to learn them.

The "red flag" gun confiscation laws (aka "extreme risk protection orders") that essentially skirt due process we are foolishly allowing to be put on the law books increase the likelihood that what happened in 1780 Union County will be happening more often during our time as mendacious gun control activists prod police into SWAT raid searches, seizures and confrontations with Second Amendment defenders. Not because they are actual threats, but because said activists, like Caldwell's enemies, want to shut them up or vilify them with grandstand publicity tactics that scare the public as police are known to do.

That will likely mean more murders by police like those committed by the FBI of the Branch Davidians and more dead Vicki Weavers, the woman gunned down by an FBI sniper at Ruby Ridge, Idaho while holding her baby. Both incidents started as gun control police publicity funding scares about unconventional lifestyle people with firearms who were then demonized via false allegations of child abuse, racism and and other incendiary rhetoric having nothing to do with guns. 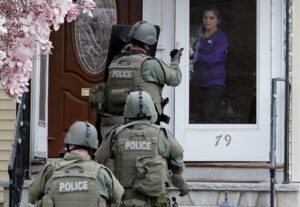 The bottom line is that "red flag" image of Hannah Caldwell being shot could be your wife or other family member no matter how chummy you may be with police or how often you have served them tea at your home.

If deadly redcoats, looting Hessians or any of the other mentioned events seem over the top or unlikely to happen, please read about the increasing number of gun owners who have already been killed by police in "red flag" confrontations or other deadly encounters that may well have been prompted by personal animosity or political pay back having nothing to do with guns.

Read the accounts of those whose homes were ransacked and virtually destroyed by police with warrants issued on false evidence who cannot be held liable.

Read why the U.S. 9th Circuit Court ruled the Fresno cops Micah Jessop says stole $225,000 during a search cannot be sued because of police qualified immunity and his lack of "a clearly established Fourth or Fourteenth Amendment right to be free from the theft of property seized pursuant to a warrant” no matter how dubious the evidence was for its issue and no matter that Jessop was cleared of the allegations that were the basis for the raid. 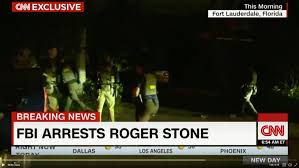 Read the accounts of those who have had police guns shoved into their face at 4 AM as happened to political strategist Roger Stone by the FBI lackeys of his political enemies who framed him for perjury. An insider tipped CNN to be at Stone's home and broadcast what those enemies wanted to be his humiliation and possible death on national TV, according to my Washington sources. “It’s a message for everyone," adds retired FBI supervisory special agent Todd Hulsey. “They are saying, ‘we are going to get you.’ And it’s going to be an unpleasant arrest."

Finally, read about those who have been murdered by government agents, as was Donald Scott in Ventura County, CA, during a bogus drug raid after he refused to sell his property to Uncle Sam. Yes, Uncle got Scott's property.

At present, seventeen states have laws that allow police, family members or others to ask courts to take weapons from people they claim may be dangerous. In many of these states, political groups that were fully aware that the concept behind red flag laws can be easily expanded and weaponized to their advantage led the drive to pass the legislation.

States define “red flags” differently, but they largely follow the same process. In most states, family or community members can petition a court to have someone's guns confiscated by claiming that a person exhibits erratic behavior or has expressed some intent to hurt themselves or others. That's a pretty vague standard. And it gets fuzzier when put into the hands of former spouses, lovers or revenge seekers.

If those sorts of events continue, and it appears they will because of the enabling effect of "red flag" laws, we will find out whether Americans still have the backbone of their colonial predecessors or whether the spirit of liberty and justice of those past has been replaced by a squishy spine.