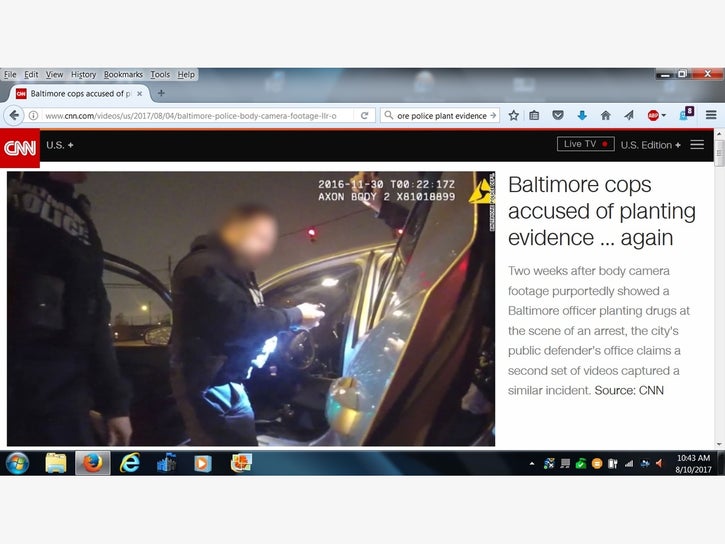 Defense attorney: "Mr. Guevara, isn't it true that you intentionally framed Jacques Rivera for a murder that he did not commit?"

--A Chicago cop is accused of framing 51 people for murder.

When Baltimore police started wearing body cameras in 2016, then Mayor Stephanie Rawlings-Blake said they would "help bring a greater sense of accountability and trust" by showing that police weren't framing suspects with fake evidence.

Instead, those cameras showed police planting evidence to frame suspects according to the Baltimore District Attorney and Public Defender office.

Baltimore Sun reporters found more than forty criminal prosecutions were dropped as a result and hundreds more may have to be. 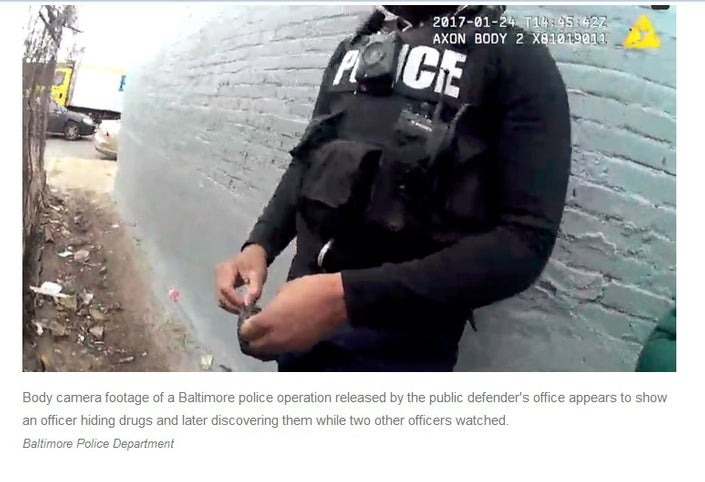 One video apparently shows a Baltimore policeman planting drugs at the scene of an arrest while another features "multiple officers working together to manufacture evidence," according to Debbie Katz Levi, head of the city public defender's Special Litigation Section.

As expected, Baltimore police commissioner Kevin Davis defended his police: "I think it's irresponsible to jump to a conclusion that police officers were engaged in criminal misconduct. That's a heavy allegation to make." Heavy or not, the preponderance of proven past Baltimore police evidence fakery would indicate this latest charge is probably true. But evidence fakery by Baltimore police isn't solely a matter of false physical evidence.

Fake physical evidence is backed by police perjury, and both are too often knowingly presented in court by prosecutors who also illegally hide exculpatory evidence from defense attorneys. Baltimore Judge Barry Williams discovered prosecutor Marilyn Mosby withheld exculpatory evidence in a trial against police there for the death of Freddy Gray while in their custody. Days of riots ensued.

Judges don't always save the due process bacon, though. In a 1990 case I covered while a CNN reporter, I noted in three broadcast stories plus another in The Village Voice that the politicized evidence U.S. Attorney Seth Weber presented to slap John Pozsgai with the longest prison sentence and largest fine in the history of environmental crime was false.

Solicitor General Kenneth Starr, later admitted to appeals court judges that Weber's government evidence was indeed false, but that the conviction should stand because the false evidence was so compelling that jurors "could reasonably infer " it was true.

Pozsgai's conviction did stand and the US Supreme Court refused his appeal. Starr's name was mentioned at the time for a possible Supreme Court nomination. That same sort of Kafka nightmare was at the core of the government's prosecution of the surviving members of the Branch Davidian religious sect. That trial featured false government evidence and the withholding of exculpatory material regarding the mass murder of 86 Davidian men, women and children by the actions of the FBI, Bureau of Alcohol, Tobacco and Firearms (BATF), US Army and or British Special Air Service (SAS) troops Federal officials told lie after lie in sworn testimony to Congress and a federal court.

The bottom line was that virtually all of the government's official story is not true and that includes the special investigation done by former U.S. Senator John Danforth. As the producer of the award winning documentary "Waco: The Rules of Engagement (WTRE)," I refused his subpoena because it was clear the fix was in and because Danforth would not end the onerous surveillance I was under or stop the threats from federal law enforcement I and my researchers had received while making WTRE. "We can't do anything about that" was Danforth's answer.

After the Davidian trial, jury forewoman Sarah Bain said "The federal government was absolutely out of control there. We spoke in the jury room about the fact that the wrong people were on trial, that it should have been the ones that planned the raid and orchestrated it and insisted on carrying out this plan." That jury found the Davidians innocent of all but a minor charge among the gazillions levied against them (overcharging is a common tactic). Matters went surrealistic when Assistant US Attorney Bill Johnston learned from my WTRE researchers that the FBI and others had withheld exculpatory evidence and said so. His own Department of Justice employer then prosecuted Johnston for the mind boggling offense of justice obstruction which in this instance meant the FBI and other powers that be were angry that Johnston had publicly called them out for their lies.

Are those practices unique? Based on my personal experience as a reporter for Baltimore radio stations WBMD and WCBM during the 1960s, my street aide work for Baltimore's political boss of bosses, former mayor "Big Tommy" D'Alesandro (Nancy Pelosi's father), my University of Baltimore Zeta Tau Epsilon policeman fraternity brother, my work to expose New York City Police corruption during the 1990s and the fake evidence and lying by FBI agents, among other federal police, I discovered during the course of various news investigations, the answer is no.

"Police perjury in criminal cases - particularly in the context of searches and other exclusionary rule issues - is so pervasive that the former police chief of San Jose and Kansas City has estimated that 'hundreds of thousands of law-enforcement officers commit felony perjury every year testifying about drug arrests' alone" said emeritus Harvard law professor Alan Dershowitz to the 1998 House of Representatives Judiciary Committee. Quoting judge Jerome Frank in his book , Courts on Trial: Myth and Reality in American Justice, Dershowitz went on to say that "cases often are decided 'according to the preponderance of perjury.'"

Allegations of Los Angeles Police Department planted evidence and perjury were core issues raised by Dershowitz while defending O.J Simpson against double murder charges. He said police everywhere are taught to fake evidence and lie. The main justification for that I've heard from cops and prosecutors is extra legal justice. Our constitutional rights and rules of due process can and do endanger public safety by making it all but impossible at times to arrest or convict vicious criminals who are then left free to rob, rape, murder, deal drugs or otherwise do harm.

And therein lurks a disturbing conundrum. The relatively safe streets many recall, as I do, in places like Baltimore, New York, Los Angeles and other cities during the 1950s and 1960s were in arguable part due to police fake evidence and perjury practices that put dangerous criminals in prison. 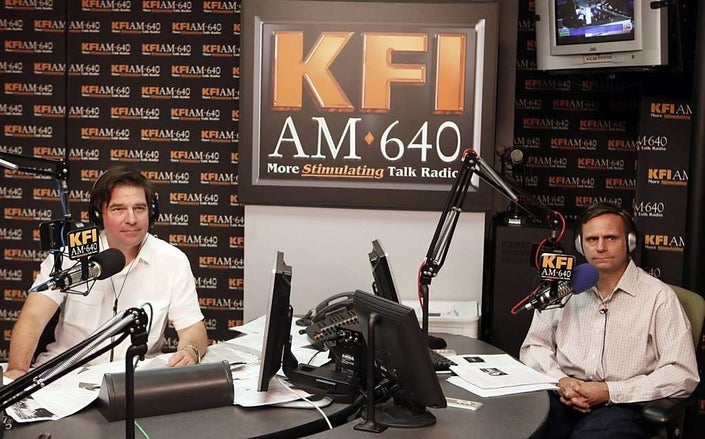 Perhaps that's why talk show hosts like KFI radio's nationally syndicated John Kobylt and Ken Chiampou have often said that they don't care how the police get evidence so long as they get the bad guy. But is that hypothetical "bad guy" really bad or could he be a target of opportunity or retaliation or, as John Pozsgai was, the schnook that gets nailed for violating an unjust law politicians want enforced to generate self serving political propaganda?

I have exposed plenty of such cases over the years. It's the other side of the fake evidence perjury quandary and academic researchers say there's no shortage of either.

"If you're talking about lying under oath by police, it's prevalent beyond belief" found New York University criminal evidence professor Paul Chevigny and others who've studied the subject. "The main thing about the job is cover your ass-that's taught at the police academies" he discovered. "We had to charge several police working with us for perjury" confirms a former Assistant U.S. Attorney. "Testalying" is the coined term among New York City's finest and random headlines like these indicate only a small part of the practice:

* A Chicago cop is accused of framing 51 people for murder.

* "A New York State Police Trooper bragged to the CIA while applying for a job bout how often he and other police planted fingerprints at crime scenes and faked other evidence to get convictions" recalled Fordham associate law professor and former federal prosecutor Dan Richmond.

* Special commissions investigating police corruption in Boston, Los Angeles and New York City all found ample examples of faked evidence and lying. I know a thing or two about NYPD corruption since I provided information to one of those New York City commissions. 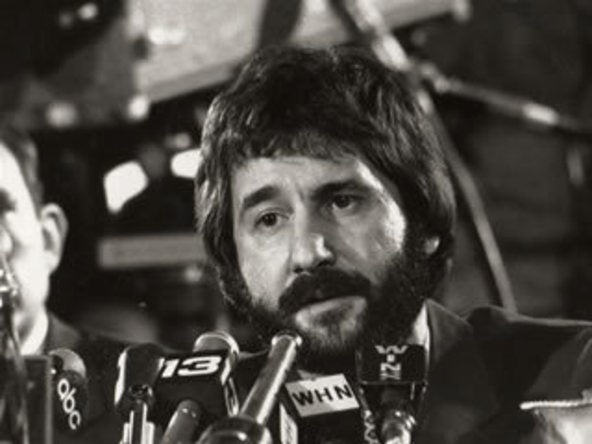 The Mollen Commission followed-up the findings of the Knapp Commission that investigated the NYPD corruption exposed by famed detective Frank Serpico.

According to the New York Times, the Mollen Commission found "that the New York City Police Department had failed at every level to uproot corruption and had instead tolerated a culture that fostered misconduct and concealed lawlessness by police officers."

That "active criminality" was largely drug gangs formed within the NYPD and the use by officers of their official powers to plant evidence and give perjured testimony against those who threatened their operations. How much evidence fakery and perjury are yet to be discovered?

Police "codes of silence" make it impossible to empirically say and technology like body cameras don't necessarily help. For instance, a high percentage of the Chicago police cam videos miraculously disappear. Same for other departments. But there's enough evidence on the record to know that police planted evidence and perjury are not the outlandish conspiracy theories they are often said to be -- especially when police prevarications are knowingly used by prosecutors.

So do federal officers found a study titled Win At All Costs by the Pittsburgh Post-Gazette. "Hundreds of times during the past 10 years, federal agents and prosecutors have pursued justice by breaking the law. They lied, hid evidence, distorted facts, engaged in cover-ups, paid for perjury and set up innocent people in a relentless effort to win indictments, guilty pleas and convictions … Rarely were these federal officials punished for their misconduct. Rarely did they admit their conduct was wrong." Former Durham, North Carolina District Attorney Mike Nifong is an exception.

"I agree with the attorney general's statement that there is no credible evidence that Mr. Seligmann, Mr. Finnerty and Mr. Evans committed any crimes for which they were indicted – or any other crimes." The three named were white Duke University lacrosse players that Nifong had indicted for the rape of a black stripper at a fraternity party in a volatile, racially charged 2006 case that had Americans at each other's throats for over a year.

For lying to the court and knowingly withholding exculpatory evidence, among other things, Nifong was disbarred and sent to jail -- for one whole day. An unknown number of other corrupt prosecutors and police who will never suffer any consequences for their actions are still spreading misery. But which one?

That's the question on my mind as I answer by Los Angeles jury summons. The integrity of our jurisprudence system is based on a reliance that the evidence presented by police and prosecutors at trial is true and that the alleged laws broken are just laws and not statutes that reflect the vicissitudes of whim or political agenda. Is it possible to tell which is which?