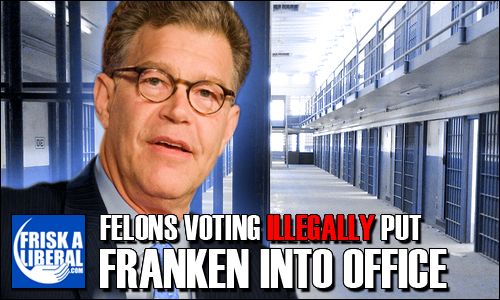 Maybe I’m deaf and blind, but two weeks after a voting records examination report showed Minnesota Senator Al Franken was probably elected by felons who were illegally voting in that state’s 2008 general election, I’ve yet to come across even one mention of that story in the agenda-setting media. 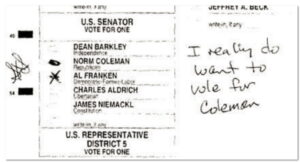 An actual Minnesota ballot that counted for Franken

Yesterday, I kept an eye on CNN’s Rick Sanchez, Wolf Blitzer, HN’s headline hammerers, and MSNBC’s Obama cheer leading squads. It’s too early for the “prestige” glamour anchor news shows on NBC, CBS, and ABC as I write this so maybe the story will be on later… Psyche! — as “New” Black Panther chairman Malik Zulu Shabazz likes to say.

Denial of the vote to convicted felons is a big deal to the Panthers as well as many other black groups that want nothing to do with the Shabazz crew because most now affected are black and vote Democrat- the very reason conservatives like Alabama Republican Party Chairman Marty Connors say, “We’re opposed to [restoring voting rights to them] because felons don’t tend to vote Republican.” Yep, around 90% of the time they don’t.

Given that most reporters are liberal Democrats, it seems reasonable that would generate some coverage–especially when a couple of additional facts are considered. Many disenfranchisement laws were originally designed to specifically bar blacks from voting after the 15th Amendment said nobody could be kept from voting because of race. 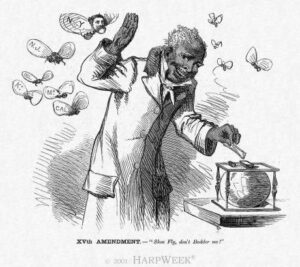 This Harper’s Weekly cartoon shows an elated black man casting his vote under the authority of the Fifteenth Amendment, as he shoos away the irritating “flies” of states which voted against its ratification.

There are reasons for the politically minded news person not to run with Franken story even though it won’t affect his win, of course. Drawing attention to the possibility that illegal voters may have elected Franken may delegitimize his win in some minds. So it isn’t going to be on any other news outlet except for Fox News .

Still, you’d think there would be enough intellectual honesty (I find myself using that phrase a lot when writing about modern journalism) to at least acknowledge the report done by the conservative watchdog group Minnesota Majority as a springboard into the general issue of whether those convicted of felonies should be allowed to vote.

In the interest of full disclosure, I believe, in principle, one should be able to vote after his/her debt to society has been paid in prison time and probation. But it’s a principle I can afford to hold because the U.S. Constitution saves me from being a hypocrite. You see, a portion of the 14th Amendment says states can deny the vote “for participation in rebellion, or other crime.”

The details vary from state to state, but basically, 48 states deny voting to those in prison, 33 states say parolees cannot vote, and 29 say those on probation can’t. In terms of numbers, that means around four million Americans cannot vote.

Does that number matter?

According to a University of Minnesota study, allowing convicted felons to vote would have put Al Gore in the White House instead of George W. Bush.