Film Review: In ‘Get Low’ Robert Duvall is Seamless

Tales of the whimmydiddle‘s mysteries aside, one of the most stupefying stories I can recall from my childhood in the North Carolina – Tennessee mountains was about a Volunteer State man who held a 1938 funeral for himself before he died so he could hear what people had to say about him. More than 8,000 attended, including a man who lived next door to my grandmother in Brevard, North Carolina.

He said he went because he and the others there got to participate in a lottery for the man’s land when he did pass on, which was 5 years later. That man was “Uncle” Felix “Bush” Breazeale — shown sitting in front of his own coffin — and it’s that episode of his real life story that Get Low (as in get humble before God toward the end of life) is about. 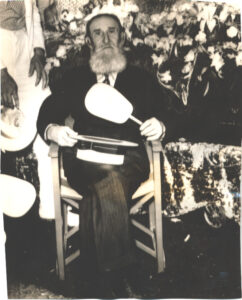 The rest of Get Low tracks elements of the real story and uses some of the real names, but it introduces fictionalized backgrounds and situations to flesh out compelling characters. In the film, Felix Bush (Robert Duvall) has lived alone in a cabin in the woods for 40 years.

During those years, the town folk’s imaginations have concocted all sorts of stories about him. He killed two men in a fist fight one says he heard. Another says Felix knows the devil and has unholy powers — a claim I heard several times myself about people who lived far back in the Appalachian woods where they practiced granny magic with mountain herbs and Witch Hazel. The Smokey Mountain mists do excite imaginations. But when Felix learns a friend from long ago has died, he goes to see sardonic funeral director Frank Quinn (Bill Murray — who delivers his lines so well it’s hard to hear over the audience laughter) and his associate Buddy (Lucas Black) with a wad of cash to buy himself a funeral party.

From that day forward until the the event, we learn just enough about Felix’ past to keep us on the hook until he tells why be became a hermit. Sissy Spacek plays a past love interest. 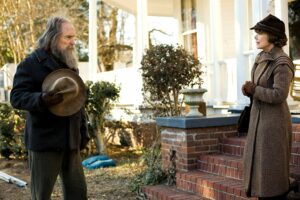 Braezeale: “Folks, I’m tellin’ ya, this business of having your funeral before ya die beats sparkin’ in a buggy!”

All of that created story is believable except for one part. Felix wants Rev. Charlie Jackson (Bill Cobbs), a “colored” (the word used in the film) preacher who knows his secret, to officiate at his funeral. Not only was the real Reverend Jackson white, the film’s depiction could never have happened.

Having lived in the Jim Crow South, I can tell you that the portrayal of a black preacher leading a white man’s funeral before almost ten-thousand whites (most of whom were likely Ku Klux Klan sympathizers if not members) in rural Tennessee in 1938 is simply a writer’s fantasy about the way he may wish race relations were then but weren’t.

Segregation was the law, it was a law 99.99% agreed with and it was enforced. And while there were loving and respectful relationships between whites and non-whites in involvements that were typically too nuanced to explain here, they happened in private with an ever present recognition of each other’s unequal racial and class status.

The placement of whites and blacks on equal social footing during this time has been written into a number of period films. But the fact that error is in this particular film is a surprise given that Duvall attributed Get Low’s correct southern character and cadence to Alabama raised writer Charlie Mitchell.

At a Q&A following a special screening of Get Low, Duvall told me this was just another script until Mitchell re-wrote it to capture the southern idiom as only a southerner could. I asked him to define what Mitchell added that made this a southern story as opposed to one from, say, rural Michigan, and he pondered a bit. Finally, he said “It’s up there on the screen.” Then he reflected a bit more and started talking.

Paraphrasing, “It’s little things like the way Sissy Spacek plays the piano, the subtle spirituality of the subtext, the gentlemanly mannerisms, the vision in the woods of Felix’ lost love … That’s it.” Directly quoting now: “What makes this so hard to describe and grasp is that there are folks who live in New York who don’t know anything about what goes on West of the Hudson and look down on people out there in what they call ‘fly-over land.’ But you’ve got to give those people their due, they’ve got a sensibility and a touch that we can’t have America without.”

That southern touch is most evident, I believe, in Duval’s The Apostle. It’s a story about a preacher on the lam from the law which Duvall wrote, starred in, directed and paid around 8 million for. He cast Billy Bob Thornton as the bad guy because, Duvall said, Thornton instinctively did small character things a southerner would do because that’s what he is. Thornton, you may recall, is the racist who tries to destroy Duvall’s racially mixed church. In that film, Duvall shows us the new South in which most whites have overcome their past prejudices and have evolved into that society Martin Luther King spoke about where character trumps skin color.

Much of the rest of the Q&A involved questions to Duvall about the problems with getting independent films done and acting methods. It took seven years for Get Low to get done because funds weren’t available. Duvall said he found it easier to get 150 million or more for a studio project than the 10 million it cost to do this one. On acting, Spacek said one big reason she took her role in Get Low was to observe Duvall at his craft. “He’s seamless,” she cooed. “You don’t see the effort at all.”

“How much rehearsal do you do for a scene, Mr. Duvall?”

“What was your motivation for your wood chopping scenes?”

“Well, Mr. Strasberg, my motivation was to chop the damn wood!”