Film Review: Anti-Capitalist Melodrama Grounds ‘The Flight of the Swan’ 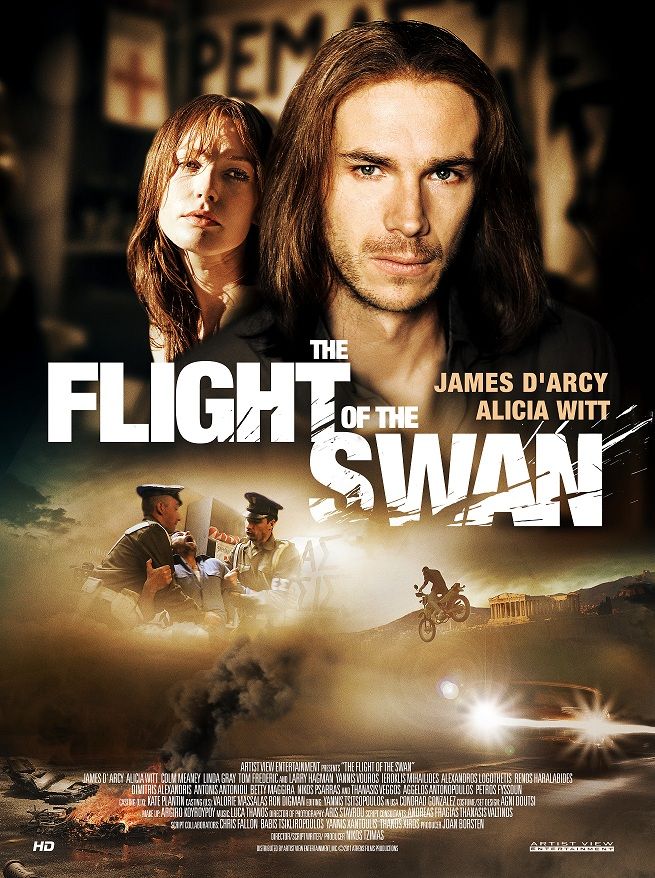 Having seen the preview director’s cut of this Greek film by auteur Nikos Tzimas twice now in hopes that it wasn’t as overplayed and trite as I first thought, I now feel better about saying that it is. My advice if you must see it when released: go for the scenery shots like the one below, stay for the popcorn — or the unintended story line illustration of the reason Greece had to be bailed out of its Euro threatening financial crisis by Germany and why Greeks apparently still love Marxism and still hate the military Junta that prevented them from having it. If your mind numbs, take a nap in what will surely be a nearly deserted theater. 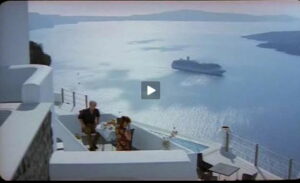 No, that was Z, the film by Costa-Gavras, about the revolutionary romance and righteousness of communists fighting the Greek Junta that was suppressing the human rights of communist radicals who wanted to turn Greece into a Marxist dictatorship so they could suppress the human rights of all Greeks. Different movie, but as I think of worshipping this stunning view above with some Retsina, that’s where this film’s cliched, anti-capitalist story line begins, according to the Tzimas description which I have slightly enhanced for effect.

The drive for success transforms Alexis (James D’Arcy, “Master and Commander,” “Nicholas Nickleby”) from a young, Greek Bolshevik idealist into the capitalist pig embodiment of everything he hates. But when his company causes a Biblical scale (that’s how the film describes it) ecological tragedy, he is shaken to his senses. To reclaim his lost soul in this gazillionth riff on Goethe’s Faust (which is essentially an assortment of Greek mythology themes about the mortal road to the Hellenistic hell of Tarturus), Alexis must expose the Mephistophelian beast he serves. Bemoans Alexis about the bill he’s run-up with Beelzebub: “I ended up serving the system I fought so hard to change. Yes, it gave me riches, but the price was my soul. 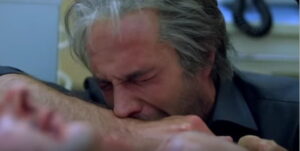 Arrrrrrrrrghhhhhhh!!!!! – the angst of Faust is thrust upon us by D’Arcy as a Medea mimic — it is a Greek film, ya know!

Unlike the play, however, he gets no winged dragon drawn chariot to lift him away to Heliopolis before the audience can retaliate for his excessive melodrama. Then again, maybe the flying swan scenes which are the source of the movie’s title are really dragon metaphors. Whatever they were, I couldn’t figure them out and Tzimas’ answers to my questions were all Greek to me. 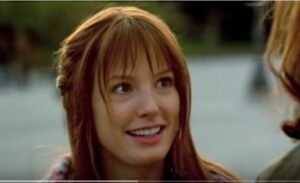 But no wonder Alexis is pained, his hippy-dippy 60s sensibilities wife, Maria (Alicia Witt, “Mr. Holland’s Opus” “88 Minutes”), thinks they can have the money that pays for their expensive home with that great view of the anchored cruise ship without paying the price in stress and time away from family that practically everybody else finds necessary to earn that kind of money: “I’m sleeping with a fucking robot. You’ve lost yourself at that stupid firm. Where’s the tender poet I fell in love with?” 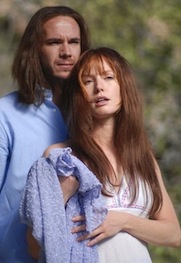 Wellll, Maria, ya think that tender poet realized nobody pays for prose and started working his butt off to afford your Mercedes, designer clothes and all the other expensive stuff you obviously can’t live without? And does it occur to you or Tzimas that if all Greeks worked as hard as the Alexis character, the Germans wouldn’t have to tell his countrymen they could fix a lot of their own financial woes by getting up earlier and napping less?

Tzimas’ intent is to cast corporations, especially American ones, in the worst possible light as wanton destroyers of the environment and worse. Speaking as one who used to expose corporate crime (check my bio), that’s a ridiculously broad brush smear of an institution that has provided the highest standard of living the human race has ever known, but it is the operative leftist stereotype being sold here in order to make a case for replacing it with authoritarian government power. So to that end, Tzimas portrays Alexis’ company as one that routinely lies, cheats, steals and hires murderers to kill anyone who gets in the way of an obscene profit. “Ethics are really no concern of ours. The rules of the game are set by the system,” the company chairman explains to Alexis.

And who did Tzimas cast to play that amoral corporate master philosopher of crime in the suites? Why none other than Larry Hagman in a repetition of his ethically challenged J.R. Ewing role.

That should be enough for any ordinary director to pound home this anti-capitalist message. But just in case somebody missed the Dallas association, Tzimas also cast Linda Gray, J.R. Ewing’s long suffering wife Sue Ellen, as Alexis’ mother.

Speaking of Alexis, the last time I saw James D’Arcy in a movie he was a suicidal midshipman holding a cannonball while jumping into Davey Jones’ locker. That may not be a bad place for this film, because I cannot imagine any amount of re-editing that will make The Flight of the Swan worth paying money to see.

On the other hand, letting people into the theater free and then charging them to get out would be worth the exit price.