Era of Big Government Thrives at the IRS 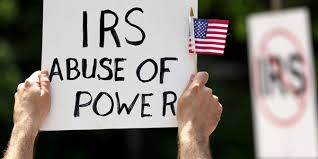 "Taxes are the life-blood of government" and, despite the move toward federal downsizing, lawmakers seem to regard tax collection akin to making sausage -- none wants to look at the process.

Death and taxes may be inevitabilities of of human existence, but that is hardly a sufficient explanation for what happened to Kay Council.

Eight years ago, after brutal pursuit of a claimed $300,000 tax tab -- monies not even owed -- Council's husband, Alex, left this note on their kitchen table:

I have taken my life in order to provided capital for you. The IRS and its liens ... taken against our property illegally by a runaway agency of our government have dried up all the sources of of credit for us. S I have made the only decision I can. It's purely a business decision. I hope you can understand that. I love you completely.

With $250,000 in insurance proceeds, the heartbroken widow moved into a small town house and wrote her lawyers a check to continue battling the Internal revenue Service. Eventually, she won. Federal judge Frank Bullock ordered the IRS to drop its wrongful liens and claims and pay $27, 971 for attorneys fees and expenses.

"We didn't do anything wrong," she told stunned members of a Senate subcommittee. "We just got caught up in the middle of a big IRS screw up." But the IRS is nothing if not vengeful. Its lien remains on Council's credit record, a ruinous reminder of her ordeal that the IRS is not required to have removed. Some may find solace in Supreme Court Justice Owen Josephus Roberts' 1935 apologia. "Taxes are the life blood of government." Because they are, critics say, neither Congress nor presidents have much cared how the IRS collects them.

For instance, a man whose brother was killed in the 1988 terrorist bombing of Pan Am Flight 103 had to hire an attorney to fight an IRS demand for $64 million based upon the agency's 1994 "guesstimate" that he had received an $11.7 million settlement. The fact was was that she had received no settlement whatsoever.

Then there is the 10-year old daughter of a man the IRS claimed owed $1,000 in taxes, whose $600 paper route savings were seized by the IRS lest she benefit from here father's alleged failure to pay.

James Bovard reports the case of Daniel Heller, an attorney representing the Miami News after it revealed the IRS' "illegal spying on the sexual and drinking habits of important local citizens. Heller eventually found himself framed by the IRS for tax fraud when agents intimidated his accountant into making false charges. Heller was jailed for four months before an appeals court overturned his conviction.

The violation of privacy Heller's client exposed is apparently not unusual. In one regional office, 369 IRS employees were found to have perused and even altered the tax returns of friends, celebrities and many others during 1993. Did IRS Commissioner Margaret Milner Richardson so much as notify those whose privacy had been breached? No. "I'm not sure there would be a serious value in terms of protecting the the taxpayer's rights," she said -- an answer critics say is wholly in keeping with her agency's audit policy.

Consider, for example, the "Calvin Klein" audits -- so named because IRS agents literally may examine a taxpayer's underwear to deduce whether it indicates a lifestyle more expensive than reported income might support. Such an audit may be instituted at any time against anyone without showing probable cause of cheating. Under pressure to provide ever increasing amounts of money for Congress to spend, these so called "economic reality" suits actually are criminal investigations that presume every taxpayer cheats.

Is the IRS out of control? Tax litigation attorney Daniel J. Pilla, author of "How to Fire the IRS" and seven other books based on tax matters, wrote this sobering assessment for a Cato Institute Institute study: "Congress has doubled the IRS budget over the last 10 years - making that agency one of the fastest growing nonentitlement programs. It has increased its employment by 20 percent. The IRS powers to investigate and examine taxpayers transcend those of any other law-enforcement agency. Virtually all of the Constitutional rights regarding search and seizure , due process and jury trial simply do not apply to the IRS.

A mere scratch of the surface reveals that the IRS paid $5.3 million to informants during 1993, the most recent years for which figures are available. It recruits accountants to snitch on or entrap their own clients, yet 64 percent of the 1993 IRS budget couldn't be accounted for, according to the General Accounting Office. "The average IRS audit finds an additional $4,500 assessment and is wrong half the time., and one third of the taxpayers assessed penalties were wrong half the time, says Pilla.

Little wonder that former IRS Commissioner Shirley Peterson says, "I would repeal the entire Internal revenue Code and start over" -- preferably with a system other than a progressive income tax.

Can it be done? Council, whose husband the IRS Code considered guilty until proven innocent, is one who has not given up on a solution. "I was cheated of growing old with the man I love.I lost my best friend," she says. "But if enough little people like me keep coming forward, there will be changes.