The unfortunate answer is yes 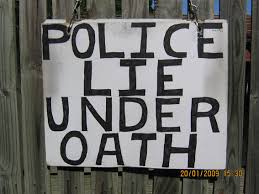 In court, the Simpson defense lawyers claim a Los Angeles Police Detective may have framed their client and lied about it. Out of court, defense attorney Alan Dershowitz broadened the charge to all police, claiming they're taught to lie. Media pundits generally scoff at that claim as a sleazy, weak and desperate tactic. Police across America characterize it as an unjustified smear. Is it?

"If you're talking about lying under oath by police, it's prevalent beyond belief" found New York University criminal and evidence law professor Paul Chevigny and others who've studied the subject. "The main thing about the job is to cover your ass -- that's taught at the police academies" he discovered. "We've had to charge several police working with us for perjury" confirms a former Assistant U.S. Attorney. "testalying" is the coined term among New York City's finest.

Disturbing? Evidence fakery may be as common.

Do police concoct evidence and lie under oath? Let's not be naive. The unfortunate answer is yes. How often? Police "codes of silence" make it impossible to empirically say. But it's often enough not to be the improbable or outlandish possibility it's being painted to be. It's also often enough to wonder why the media doesn't do more to expose it. That is not to say or imply O.J.Simpson was framed. Lacking proof, suggestions that Detective Mark Furhman took a bloody glove from the murder scene and planted it at Simpson's house remain suppositions by defense attorneys doing their job. They're supposed to cast doubt in juror's minds even if they know their client di the crime. That is not sleazy, despicable, unprofessional or any other commonly used pejorative.

Anglo American jurisprudence is not an inquisitorial system designed to protect the government from its people. It is an advocacy system designed to protect people from their own rogue officials. That power corrupts and there is ample motivation to do so is a fundamental system presumption. Police and their bosses are judged on arrests and convictions. For those and other reasons, our justice is in the process, not in adherence to the law 'good bad or indifferent" as Inspector Javer told Jean Valjean.

Police and prosecutors may be corrupt or overzealous. The law broken may be unjust. Breaking the law may have been justified under the circumstances. Recognizing that reality, guilt or innocence isn't simply a matter of whether one did or didn't do a particular act. And for that reason, verdicts aren't solely trusted to judges who'll likely "apply the law and only the law.' "Guilty" and "innocent" determinations are left to the common sense and mercy of the community represented by 12 fellow citizens empowered to "bring in a verdict in the teeth of law and fact."

Victor Hugo's Jean Valjean broke the law. He stole a loaf of bread because his family was starving and there was no alternative. Was he guilty? Martin Luther King broke the law. He disobeyed unjust racial discrimination statutes. Would you have convicted him? Colonial New York published John Peter Zenger admitted breaking the law. He called the royal governor corrupt -- which he was -- and was charged with seditious libel, a British law that didn't and still doesn't (as in Singapore) recognize truth as a defense. Would you have voted to jail or hang him?

A system subordinating literal written law to the higher law of God, conscience, extenuating facts or corruption in order to protect the unjustly accused and thwart official tyranny also protects the justly accused from easy conviction. That's what the presumption of innocence is all about. Simpson's defenders may justifiably attack the credibility of his accusers. So could lawyers defending Mother Theresa or the devil himself. To denigrate that defense is an indication of our own desperation to disbelieve human nature at our peril. Yes, police lie. And because they do, we give the devil the full protection of law for our own protection.