D-Day could have been a German Holiday

General Eisenhower had two press statements. One announced a successful allied invasion of Normandy. The other, its failure. 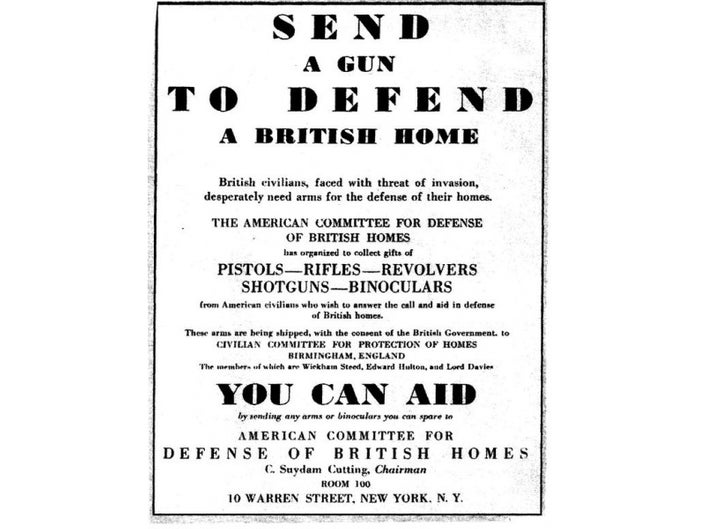 By Dan Gifford and David Kopel

I, Dan Gifford, have added information that has become known since that time.

A Second World War Allied Powers win was far less certain than most know or want to admit if they do.

The Soviet Union nearly lost the war in 1941 and suffered from poor planning, according to Marshal Georgy Zhukov in the frank television interview that has been banned since it was recorded in 1966. 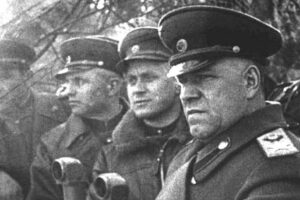 "It was an extremely dangerous situation. In essence, all the approaches to Moscow were open," he said. "Our troops on the Mozhaisk defence line could not have stopped the enemy (Nazis) if he moved on Moscow."

As we celebrate the British and American invasion of Europe to roll back tyranny, we should remember that during WWII, Britain and the U.S. came close to being invaded themselves. Looking back at the dark history of 1940-42, when the Allies were losing the war, teaches us some important lessons for today.

June 4, 1940: 338,226 British and French troops are evacuated from Dunkirk beach just before the Nazis capture it. Hitler will soon finish off France and Western Europe. Invasion of Great Britain appears imminent. Winston Churchill vows 'We shall fight on the beaches ... we shall never surrender!' but despite Churchill's brave words, much of Britain's military weaponry was left behind at Dunkirk. And while Britain frantically tries to train a civilian Home Guard, the trainees have to practice with canes. umbrellas, spears and pikes.

The British Home Guard has no guns because restrictive gun controls enacted in 1921 have disarmed the public. The British gun laws were enacted because the government did not trust the people, and was afraid of a Bolshevik revolution. But the disarmed British people now lack the means to protect their government.

Expecting a German landing within weeks, the British government has ads placed in American newspapers, begging Americans to send Britons "pistols, rifles, revolvers and shotguns." "British civilians, faced with the threat of invasion, desperately need arms for the defense of their homes" implore the ads.

In the U.S., the National Rifle Association leads and delivers.

Hitler, for reasons still not fully known, decides to bomb Britain mercilessly, but not to invade. The next year, the war comes to America.

December 7, 1941: While Pearl Harbor burns, Americans worry about a Japanese landing on the West coast, or in Hawaii. In subsequent months, American troops and the National Guard are shipped off to Manila and beyond to try (unsuccessfully) to bold back the Japanese tide. No uniformed army is left to defend American shores.

So almost immediately after Pearl Harbor, Hawaii's Governor calls for citizens and their guns to man checkpoints and patrol beaches against an expected Japanese invasion. “Remember Pearl Harbor!” “Loose Lips Might Sink Ships.” Those are among the most famous slogans of World War II. But another poster child birthed during the war—Smokey Bear—might be even better remembered. 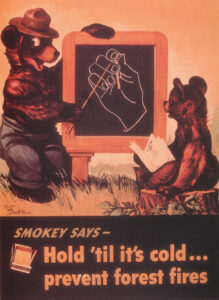 The ad campaign that spawned the cartoonish bear, and a fire prevention legend, was only made possible by wartime paranoia about the possibility of a Japanese invasion of the continental United States. 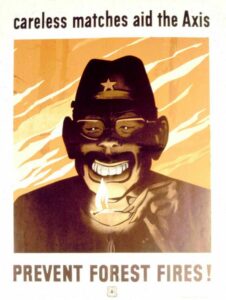 At the time, many Americans worried that explosive devices might spark forest fires along the Pacific coast—for which the U.S. was hardly prepared. 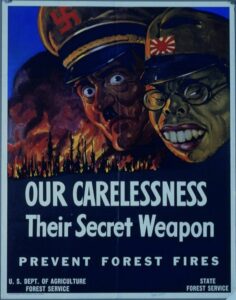 The Governors of Oregon, Washington, and other states reactivate their state militias: civilians and their personal arms (the Second Amendment's "well regulated militia'). These militias will provide the only defense if Japanese troops land. 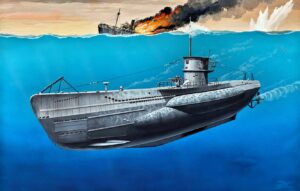 January 13, 1942: Nazi U-Boats begin operation Paukenschlag (Drum Roll), sinking ships off the U.S. East Coast at will. Although Germany, unlike Japan, lacks the naval capacity for a full-scale invasion of the U.S., the Nazi submarines could easily discharge commando raiders to attack strategic East coast targets. 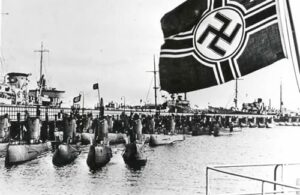 While state militias guard the beaches, the federal government begins training civilians for guerilla warfare. The War Department recommends civilians keep easily concealable guerilla warfare weapons like handguns. Altogether, about 600,000 men (and some women) perform patrol duties for the next 18 months of the war.

Even in non-coastal states, citizens arm themselves heavily; some even begin to manufacture their own ammunition at home ("handloading") since the commercial manufacturers are so busy with military needs.

The Axis powers decide not to invade, and by late 1943, the tide of war has turned, and Germany and Japan are on the defensive.

There were many good reasons for the Axis not invading in 1942, including the difficulty (but not the impossibility) of supplying a large invasion force across an ocean. One other reason that America (despite its vast natural and industrial treasures) turned out not to be a good invasion target is that invaders would have had to contend with guerrilla resistance from a heavily armed populace that was familiar with guns.

In France, Yugoslavia, and Russia, partisans were already tying down large portions of the German army. Chinese guerillas were doing the same to the Japanese in Manchuria and elsewhere. The prospect of equally fierce resistance from the better-armed Americans must have seemed daunting.

Today, there is no threat of armed foreign invasion of the U.S. But as the 20th century teaches us, world politics can change more rapidly than anyone can expect.

It's true that guns are important to protect modem Americans against the attacks of today's home-grown violent criminals. But as the authors of the Second Amendment made clear, the main benefit of civilian gun ownership is protecting the people against a tyrannical government. When armed British and American civilians helped prevent their countries against tyrannical invasion in 1940 through 1943, the wisdom and foresight of the Founding Fathers was once again confirmed.

David Kopel is a law professor at the University of Denver.