Conviction: This Decade’s Most Important Film

How many in prison were put there by police and prosecutorial perjury and false evidence? Hilary Swank was sitting in "my" Brentwood coffee shop yesterday morning and her presence reminded me that she executive produced and starred in "Conviction," a film I regard as the most important one made this decade or even during the past ten years because it is about a practice that has rotted the core of American criminal due process. That practice is the widespread faking of evidence, according to studies on the subject, by both police and prosecutors against people known to be innocent in order to look tough on crime for their own career advancement. 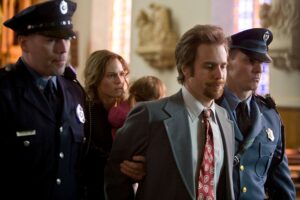 Swank hauled Sam Rockwell back to the cinematic slam for her film and that was a good thing. Rockwell's Green Mile portrayal of Louisiana psycho murderer "Wild Bill" Wharton bouncing around his death row jail cell was a standout performance. He shows us another facet in 'Conviction' as Kenneth Waters, a Massachusetts man wrongly convicted of a murder because of police and prosecutorial corruption.

Rockwell's Conviction performance is enhanced by double Oscar winner Swank and Oscar-nominee Minnie Driver. Together, they perform like a well-matched troika, the Russian three horse team that pulls sleighs, in which the middle horse provides steadiness and stability while the two outer ones gallop with abandon. Driver provides that "centerdness" with a humorous, smoldering femininity, allowing Rockwell's and Swank's characters to respectively express the gut wrenching emotion of a man unjustly convicted and the journey of a sister trying to free him against all odds.

It's a predicament that many have shared and still do. Evidence fakery and coerced lying under oath by law enforcement officers happens way more often in America's justice system than most know or would ever believe because too many people think stories like Waters' are aberrations or exaggerations. In fact, that's what Hilary Swank thought at first. "There's a part of you that has to be like, 'this could never happen.' And then you realize that it is happening."

"Hundreds of times during the past 10 years, federal agents and prosecutors have pursued justice by breaking the law. They lied, hid evidence, distorted facts, engaged in cover-ups, paid for perjury and set up innocent people in a relentless effort to win indictments, guilty pleas and convictions … Rarely were these federal officials punished for their misconduct. Rarely did they admit their conduct was wrong."

The "Conviction" story has all of the above abominations and more. It is the stuff of classic fighting-the-system outrage that only gets most people's blood boiling and talking for a couple of hours after leaving the theater because they don't think what happened to Rockwell's character could possibly ever happen to them. Kenneth Waters was a small town, former juvenile delinquent hell raiser convicted of brutally murdering an Ayer, Massachusetts neighbor woman, Katharina Brow, in 1983 because a police officer intimidated people into falsely testifying against him. Waters, who was certainly capable of killing (a bar fight scene where he threatens a man's life with a broken bottle makes that all too clear), spent 18 years in prison while his sister, Betty Anne Waters (Hilary Swank) had to earn a high school GED before she could get into college and earn a law degree in order to represent and free her brother.

She finally did so by locating murder weapon blood evidence thought to have been destroyed, and then taking it to attorney Barry Scheck (Peter Gallagher) and his Innocence Project, an organization that works to exonerate wrongfully convicted people through DNA testing. Those DNA tests did not exist at the time of the murder and showed the blood was not Kenneth Waters'.

So he was exonerated and released forthwith, right? Not according to the film, and this is one place where the film story strays from its marquee billing as "The incredible true story of Betty Anne Waters." 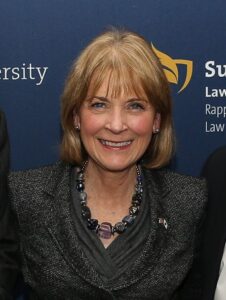 That divergence is for the sake of dramatic license says Margaret Coakley, the county district attorney who put Kenneth Waters in prison: "This is Hollywood. The public should be aware that 20 years of history was collapsed to fit into two hours. This is not a documentary."

In the script, Coakley drags her heels and files unconscionable new CYA charges against Waters which are classics of prosecutorial corruption. "That sequence of time is simply inaccurate and wrong," says the real Coakley. "Kenny Waters did not sit in jail for months after (the defense team's) DNA results cleared him. Fact is, he was released from jail in less than two weeks." Coakley is now the Massachusetts Attorney General. She's also the Democrat who lost her bid for Teddy Kennedy's U.S. Senate seat to Republican Scott Brown because she was too arrogant to campaign for it, according to the Massachusetts media.

Lest I forget, publicity seeking attorney Gloria Allred had a problem with the script as well: "No proper respect or compassion has been shown by Ms. Swank for the murder victim and her family." Allred vented at a recent news conference together with Melrose Brow, the daughter of the woman Waters was accused of murdering, who spoke for her siblings: "We are not Hollywood people like you are. We are just children of a murder victim. Nevertheless, we believe that victims matter. My mother was not just a name, and was not and is not a person who should be used as a line in a script or just a way to make a profit for the entertainment industry."

In response, Conviction's three producers offered a private family screening: "We have the deepest compassion and sympathy for the family of Katharina Brow. (The screening) will no doubt answer many of their questions surrounding the unthinkable and horrific tragedy that befell their mother." Opinions about what, if any, obligation the makers of "Conviction" had to the murdered Brow's family continue to be expressed. Perhaps the most realistic comes from producer Nathan Folks:

"It is obviously a very sensitive, very painful issue when you're dealing with such a tragic story, but 'Conviction' is about the Waters family, not the Brow family and the filmmakers obviously met with the people they felt necessary for the film. They were not under any legal or moral responsibility to take things further than that."

Once free, Waters found that the police officer who had caused his misery could not be criminally prosecuted because the Massachusetts statute of limitations had expired. Kenneth and Betty Anne Waters then spent the next 26 years suing the town of Ayer and its police department for coercing false testimony to convict Kenneth and withholding evidence that could have cleared him. The town and its liability insurer finally agreed to pay 3.4 million dollars last year, but it was too late for Kenneth. He had been killed in an accident eight years before.

Is your blood boiling? Still think Waters' case is an isolated justice system distortion? Perhaps several examples from my personal files will turn up the heat.

John Pozsgai had been hit with the largest federal fine and longest prison term in the history of environmental crime as of 1989 when CNN assigned me to a series of stories on his case. I also wrote a December 11, 1990 story about Pozsgai for the Village Voice. From the outset, I found Pozsgai's was plainly a political prosecution of a poor man who couldn't fight back that was prompted by George H.W. Bush's "no net loss of wetlands" policy. According to the local buzz I heard while asking around, the government zeroed in on Pozsgai after a neighbor man with the hots for Pozsgai's daughter called the Corps of Engineers with tales of environmental destruction after she refused the man's sexual advances.

I personally inspected the government evidence against Pozsgai and found it to be bogus. That was outed in the appeals court. There, Solicitor General Kenneth Starr admitted the government offered "no direct evidence" (see Guilt by Inference, Washington Times Editorial, August 8, 1990) that Pozsgai had committed a crime, but here's the good part. Starr argued that Pozsgai's conviction should stand because --- are you ready for it? --- the jurors "could reasonably infer" the government's false allegations were true and the judges agreed.

Stephen Matthews and his father, Melvin, were convicted of sexually molesting Stephen's young son. In "The Jaundiced Eye," a documentary I produced about the case, Stephen said he realized he was gay after his son was born. His ex wife then took up with a man who hated gays, and together they fabricated wild stories about the child being raped with a machete, among other sharp objects, during group sex sessions involving his straight grandfather and grandmother.Raped by a machete? Must have been some horrendous physical evidence, right? No, there was no evidence the sadistic claims ever happened. But evidence isn't required when the prosecutor and the jurors believe that all homosexual males and their parents are pedophiles.