CAN MASS SHOOTINGS BE PREVENTED? 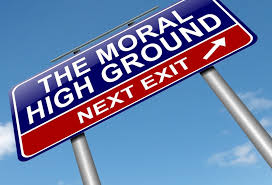 Amid all the specious rhetoric about banning AR-15s and other "weapons of war" from civilian hands that have often been used in the highly publicized mass murder of strangers or casual acquaintances (the basic definition of a "mass shooting"), there's a cogent question that's never asked: 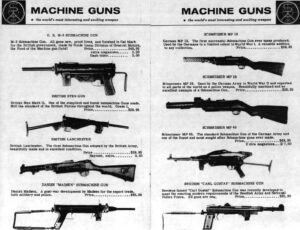 Why didn't we have such mass murders when real war zone souvenir weapons were stashed in homes around the country and machine guns could be purchased by mail from magazine ads with almost no questions asked? 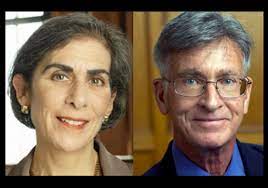 The answer, according to a joint op-ed published in the Philadelphia Inquirer by University of Pennsylvania law professor Amy Wax and University of California, San Diego law prof Larry Alexander, is that American society had a solid foundation of strong bourgeois Judeo-Christian cultural values that proscribed such acts and held people, not things, responsible for their actions. Both profs are now the recipients of scathing "woke culture" hate speech rhetoric as "white supremacists" for also pointing out another rational truth: All cultures are not of equal value compared to the bourgeois values which have been an intrinsic strength of western society long before America existed.

"That culture laid out the script we all were supposed to follow: Get married before you have children and strive to stay married for their sake. Get the education you need for gainful employment, work hard, and avoid idleness. Go the extra mile for your employer or client. Be a patriot, ready to serve the country. Be neighborly, civic-minded, and charitable. Avoid coarse language in public. Be respectful of authority. Eschew substance abuse and crime."

Wax and Alexander point out "these basic cultural precepts reigned from the late 1940s to the mid-1960s. They could be followed by people of all backgrounds and abilities, especially when backed up by almost universal endorsement. Adherence was a major contributor to the productivity, educational gains, and social coherence of that period." 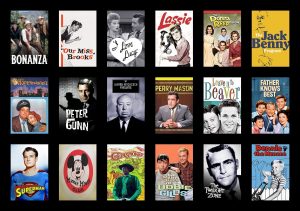 In the memory of many reading this, pop culture reinforced those rules of behavior in movies and TV shows like "I Love Lucy," "Leave it to Beaver," "The Life of Riley," "Dragnet,"  "Amos and Andy" and the 17 year run of "The Adventures of Ozzie and Harriet" among many others. Older readers will recall their radio and film predecessors spread the same values.

That is not to say mass murders did not happen during that or previous periods or that they didn't involved firearm misuse. America and all other societies have experienced mass murders throughout their histories. Governments have murdered millions on millions while criminals and family members have added to that tally -- and not necessarily with a gun. James Scales Purrington killed all eight members of his family with an axe in 1806 while Abel Clemmons used the same weapon to murder his 8 children and wife a year earlier. But the sort of "active shooter" mass killing as we now define the term didn't start until years later.

According to the Investigative Assistance for Violent Crimes Act of 2012 (IAVCA), a "mass killing" does not include the killing of criminals by other criminals like 1929's St. Valentine's Day massacre, the mass killings of robbery victims like the infamous "In Cold Blood" murders of the Clutter family in their 1950s Kansas home that writer Truman Capote made infamous or James Urban Ruppert's 1975 killing of 11 family members in his mother's Hamilton, Ohio home. To qualify as a mass killing under the IAVCA, there must be three or more people killed in a public place. 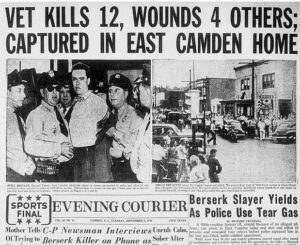 The earliest mass killing of that sort on record in America was done by Howard Unruh in 1949. Unruh went insane and killed 13 as he walked around his Camden, NJ neighborhood shooting people at random with a war souvenir German Luger he'd brought back from Europe after W.W.II.

After his street killings, Unruh shot it out with police before surrendering . 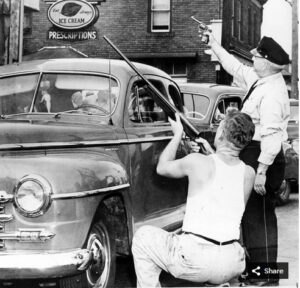 Notice the citizen with his own gun helping police -- not an uncommon occurrence then. 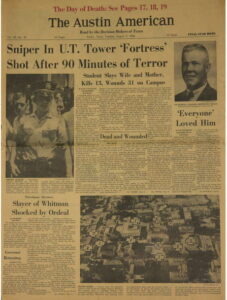 That was the last mass shooting until 17 years later in 1966 when a former Marine expert marksman with a brain tumor named Charles Whitman shot and killed 13 people from the top of the University of Texas administration tower. 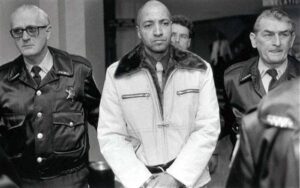 1982 was next when former prison guard George Emil Banks killed 13 in Wilkes-Barre,PA in what was described as a thrill killing. Banks cited "racial pressures" for his actions. After that, the shooting pace quickened.

Mother Jones listed seven mass shootings in public places that killed four or more in 2015. Meanwhile, Michael Bloomberg's gun violence prevention group, Everytown for Gun Safety, identified 110 mass shootings (defined as shootings in which at least four people were murdered with a firearm) between January 2009 and July 2014. More than half of those were related to domestic violence and always have been, making family violence the most common form of mass killing even though incidents didn't necessarily get reported as such until the late 60s.

That's when multiple factors like prosperity, the Pill, the expansion of higher education and unrest about the Vietnam War encouraged sophomoric antiauthoritarianism, childish thinking, loose sexual mores and drug acceptance. In excess, they corroded society beyond its ability to maintain itself. So it's no surprise we are now in an era of identity politics that have perverted the color-blind aspirations of Rev. Dr. Martin Luther King Jr. into obsessions with race, ethnicity, gender, and sexual preference.

"Adults with influence over the culture, for a variety of reasons, abandoned their role as advocates for respectability, civility, and adult values. As a consequence, the counterculture made great headway, particularly among the chattering classes — academics, writers, artists, actors, and journalists — who relished liberation from conventional constraints and turned condemning America and reviewing its crimes into a class marker of virtue and sophistication. 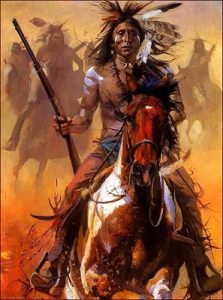 All cultures are not equal. Or at least they are not equal in preparing people to be productive in an advanced economy. The culture of the Plains Indians was designed for nomadic hunters, but is not suited to a First World, 21st-century environment. Nor are the single-parent, antisocial habits, prevalent among some working-class whites; the anti-"acting white" rap culture of inner-city blacks; the anti-assimilation ideas gaining ground among some Hispanic immigrants. These cultural orientations are not only incompatible with what an advanced free-market economy and a viable democracy require, they are also destructive of a sense of solidarity and reciprocity among Americans. If the bourgeois cultural script — which the upper-middle class still largely observes but now hesitates to preach — cannot be widely reinstated, things are likely to get worse for us all.

Would the re-embrace of bourgeois norms by the ordinary Americans who have abandoned them significantly reduce society's pathologies? There is every reason to believe so. Among those who currently follow the old precepts, regardless of their level of education or affluence, the homicide rate is tiny, opioid addiction is rare, and poverty rates are low. Those who live by the simple rules that most people used to accept may not end up rich or hold elite jobs, but their lives will go far better than they do now. All schools and neighborhoods would be much safer and more pleasant. More students from all walks of life would be educated for constructive employment and democratic participation.

But restoring the hegemony of the bourgeois culture will require the arbiters of culture — the academics, media, and Hollywood — to relinquish multicultural grievance polemics and the preening pretense of defending the downtrodden. Instead of bashing the bourgeois culture, they should return to the 1950s posture of celebrating it."