Armenians who kept their guns and fought back largeley survived 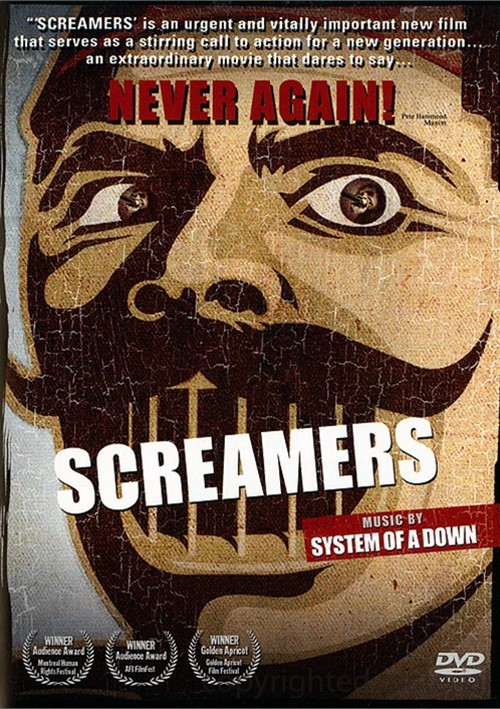 Genocide is an ugly subject that needs to be shoved into every generation's face because the deliberate extermination of some targeted group by its own government occurs somewhere in the world during every generation. What does not need to be pushed in conjunction with that awareness is the propaganda of pacifist victimhood and the exoneration by omission of the most prolific mass murderers -- something too often done because of an affinity for the killer's ideology. One spreads the false perception that resistance is futile, that none of those marked for death can or have saved themselves by fighting back. The other avoids all mention of the political dogma solely responsible for most mass murder. Screamers is a documentary that does all of the above. 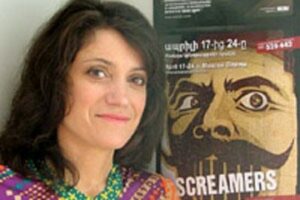 Film director Carla Garapedian accomplishes that while following a tour of System of a Down. It's a rock band of Armenian descended Americans (I reject hyphenated Americanism) who use much of their music to express outrage about the 1915 massacre of more than 1.5 million Armenians by the Ottoman Turks and the fact that neither today's Turkish government or President Obama will say it was genocide. 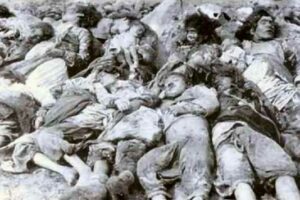 "'Screamers is about exposing the denial of all genocide, Armenia, the Holocaust, Cambodia, Bosnia, Kosovo, Rwanda, the Iraqi Kurds and the current horror in Darfur. It is about making sure the same critical message George Clooney and Don Cheadle are 'screaming' about is heard, that these atrocities 'never happen again,'" says Garapedian. Never happen again? Her lips to God's ears. 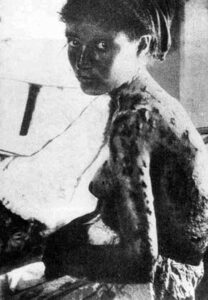 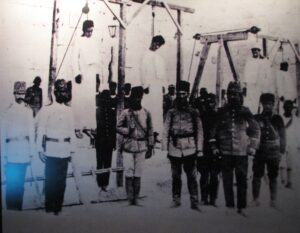 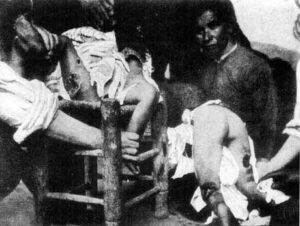 But genocides, mass tortures and rapes like those inflicted by Turks on Armenians in the above photos (the bottom one shows dead Armenian children raped by Turkish soldiers) do happen again, often for ancient reasons of religion, race or tribal score settling that are largely incomprehensible to Americans. We are a very young society when placed against the 2,500 + year hatreds between the Turkic people and the Armenians that is now a likely part of their respective DNAs. However, the film's exclusion of the reason for most 20th Century genocidal deaths and another that has made them possible started me "screaming" at Ms. Garapedian during a Director's Guild Q&A session for Screen Actors Guild members and their guests.

Second, why is there no mention that the Armenian genocide and others were preceded by a lawful disarming of those to be slaughtered by their own government and that those who broke those laws, like the two Armenian women below, fought back and often lived? 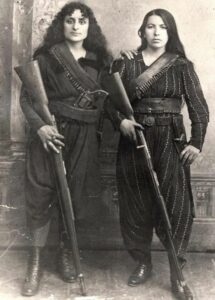 These are matters of intellectual honesty.

The film's Cambodia example doesn't mention Pol "The only good bourgeois is a dead bourgeois" Pot's Utopian Marxism motivation. Worse, Screamers says nothing at all about the estimated hundred plus million offed by Stalin, the Jong-ils and Mao Tse Tung regimes, according to the well researched Black Book of Communism and other studies. That's exponentially more dead than Hitler ever dreamed about. Considering that both Nazism and Communism are Marxist based ideologies, is mass murder to establish purity of race worse than mass murder to establish the purity of a classless society?

Why do the most prolific butchers in recorded human history, the communists, get a Screamers pass, I asked? That question's got lukewarm acknowledgment from Garapedian and maybe half of the Director's Guild audience. 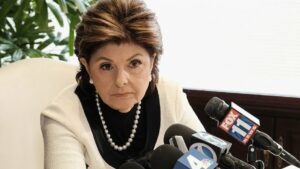 Celebrity attorney Gloria Allred even applauded after making sure she wasn't alone. But my second question about armed resistance turned the entire audience against me and elicited a humored dismissal from Garapedian about that being "an interesting NRA idea she had never heard before."

She would have had she properly researched the subject -- or maybe she did and found the facts did not match her prejudices. Either way, the real facts were published long before Screamers was filmed by George Mason University School of Law Dean Daniel D. Polsby and constitutional law attorney / criminologist Don B. Kates, Jr. in the Washington University Law Quarterly: Having systematically disarmed Armenians through a series of decrees ... the Turkish army and police were able to round up and kill over one million Armenians by a combination of overt murders and forced marches over hundreds of miles without food or water. However, thousands of Armenians from Aleppo province (modern Syria), who had secreted guns, took to the hills. Having defeated the first Turkish army units sent against them, they retreated from stronger forces in good order, until they reached the sea where the British, who were at war with the Turks, evacuated them.

The Armenian prelude to annihilation was not unique.

"The Nazis disarmed the Jews; the Khmer Rouge disarmed the Cambodians," notes Emory University law professor Alexander "Sasha" Volokh. One Cambodian survivor recalled Khmer Rouge soldiers told villagers "We are here now to protect you, no one has a need for a weapon anymore." ... [This all] took nine or ten days, and once the soldiers had concluded the villagers were no longer armed they dropped their pretense of friendliness." "It is an arresting reality that not one of the principal genocides of the twentieth century, and there have been dozens, has been inflicted on a population that was armed ... We argue a connection exists between the restrictiveness of a country's civilian weapons policy and its liability to commit genocide upon its own people," Polsby and Kates noted.

Like the omitted communist connection to mass carnage, that's major stuff to be missing from a documentary about preventing genocide -- too major to have been unwittingly overlooked. Screamers is being shown to world leaders -- most recently Canada's Parliament -- as part of an apparent effort to advance support for a world prohibition on private gun ownership. It's worth noting too that the most repressive United Nations members have long wanted to ban private firearm possession so they can more safely impose totalitarian control and commit future genocides if desired. 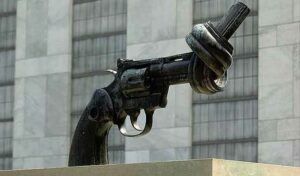 Did I just expose the twisted meaning of the Knotted Gun sculpture at UN headquarters -- that "self-defense is a privilege that governments may choose to grant or withdraw?" The practical application of that position is this: When the police or soldiers show up and it's obvious they intend to kill you, do you have a right to defend your life or an obligation to obey the law and die?

My Director's Guild experience indicates the politically correct answer is die. But that's no surprise in a Hollywood so smitten by collectivism that Mao's Kitchen and it's "Chinese Country Style Cooking With Red Memories" of around 100 million dead souls provided by Mao posters is considered trendy restaurant decor. 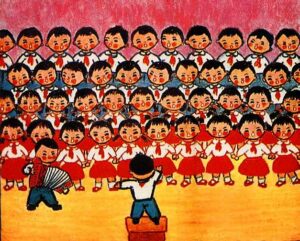 Perhaps the naiveté of passivism caused Garapedian to adopt the Michael Moore documentary model of only including those facts that promote her politics.