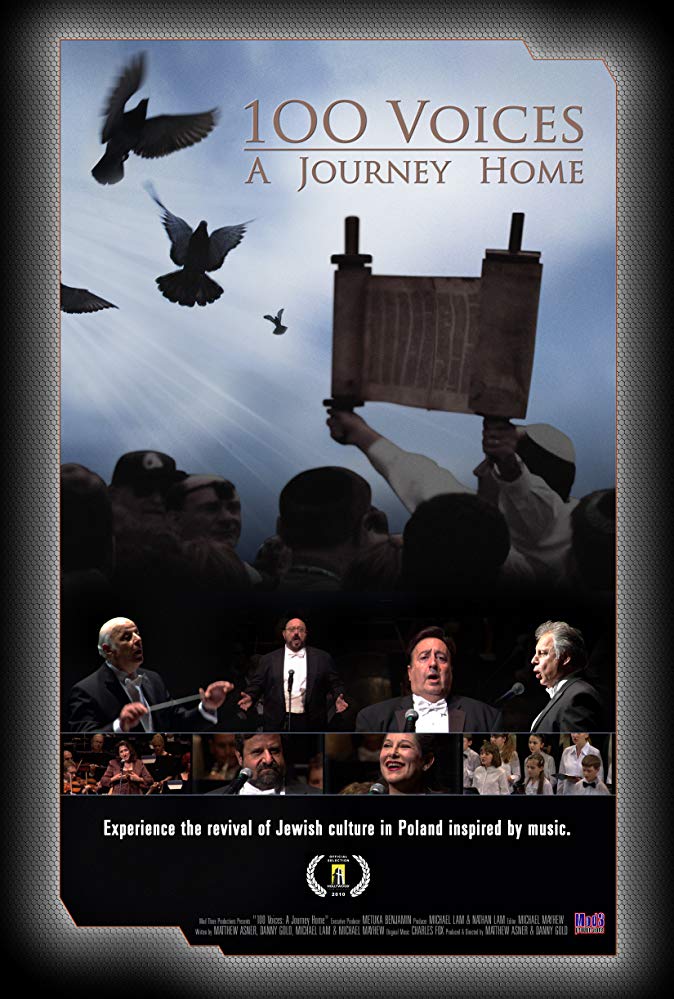 Cultures come and go. Some age into oblivion and are replaced by another. Some are lost through assimilation. But others are literally murdered. Such was the fate of Poland’s thriving thousand year old Jewish culture and its cantorial music tradition when the socialist jackboots of Hitler and Stalin goose stepped into that country and divided it between them in 1939.

On the western Hitler side, his national socialists mass murdered Poland’s civil leaders and its Jews at a variety of well-known death camps like Auschwitz, or worked them to death in Nazi factories. On the eastern Stalin side, his international socialists mass murdered Poland’s military officers and intelligentsia — much of which was Jewish — and either deported those other Jews deemed threats to Russian rule to Soviet labor camps to be worked to death or to the Nazis to be killed in their extermination death camps. So Eastside, Westside, all around Poland, both the Jewish religion and its unique culture were crushed by two Marxist based political systems concocted by demented intellectuals in which a malevolent dictator’s state is god.

That left many, like Krakow Jewish Festival founder Janusz Makuch, whose ancestors were Jewish, feeling lost: “I tried to find the answer on a basic question: What is my cultural identity? I’m not Jewish. However, I was born in Poland. Poland, where Jewish culture and polish culture intertwined through the centuries.” According to Cantor Nathan Lam, the film’s executive producer and a man I have met several times at a neighbor’s home, 90% of American Jews can trace their ancestry to Poland before the mass murdering began.

It is against that bloody background that filmmakers Danny Gold and Matthew Asner followed a group of American cantors and well known song writer Charles Fox (“Killing Me Softly,” “I Got a Name” and “Ready to Take a Chance Again.”) on a journey to Poland last year. Their aim was to document the rediscovery of Poland’s lost pre WWII Jewish art form that has so heavily influenced American theater, comedy and classic song scribes like George and Ira Gershwin, Irving Berlin and Harold Arlen. Their fathers were cantors.

“As a first-generation American whose father was born in Lublin, Poland, this film was as close as possible to being there for me,” said Cantor Paul Silbersher. “My father recalled childhood memories of Chazzan Rovitz, who was so famous even among non-Jews that there was a section in the synagogue reserved for Polish Army officers. They didn’t come to pray as Jews would, but as human beings seeking God through chazzanut (the art of singing the liturgy). Perhaps each culture has its own chazzanut, which reveals its own struggle and story. The movie reinforces my belief that this culture will not die, but be renewed.”

“I think one of the most powerful messages of this film is the importance of knowing and reclaiming one’s personal and national history,” said Cantor Sharon Kohn. “This lesson can resonate for anyone. You don’t have to be Jewish, Polish or a music lover to appreciate this documentary. When I am on the pulpit in front of the congregation, I try to emulate the authenticity of the passion for the sacred texts and authentic enthusiasm for Jewish culture that is depicted vocally by the esteemed cantors spotlighted in the movie.”

“Let’s face it, you know, the way cantorial music was here will never come back,” says Cantor Alberto Mizrahi. “There’s no audience for it, they were killed by the Nazis. I heard somebody say, whoa, we won, they lost. No, no, no: We lost. We lost. We didn’t lose just a generation of Jews, we lost an entire way of life. It’s gone.” 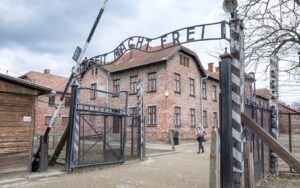 “100 Voices: A Journey Home” is a reflective movie,” Danny Gold told me. “We followed the cantors on the certain aspects of what they did to tie that into certain historical aspects of what went on with the Jewish culture in Poland.”

Among other things, those cantors and Charles Fox sang in Europe’s largest concert hall, Warsaw’s National Opera House, joined a Jewish festival in Krakow and prayed at Auschwitz with a Torah that was smuggled out of the extermination camp under the Nazi’s noses.

“It was the first time in the history of Auschwitz that anything like that had happened” says Cantor Lam. “There are souls that hover there. There are millions of jewish souls that are at that place.”

Poland is, in fact, awash in bloodied souls.

At the Krakow Jewish Cultural Festival, the hourly bugle warning call of the hejnal from atop St. Mary’s Basilica is a reminder that the original horn blower had his signal cut short during the 13th century by a Mongol arrow through his neck.

Below, in a nearby town, the search for a connection with grandparents and fathers moved on: “I feel like I’m walking in the footsteps of my father,” says Charles Fox. “I can picture him running through the streets there. There’s basically nothing indicating that a Jew had lived in this town. In fact, there were 8,000 Jews that lived there and the town was only 10,000. So it was 80% Jewish. They were all sent to Treblinka.”

“People need to know the past and how glorious it was in order to go forward, observes Cantor Joel Lichterman. “This trip made them begin to see themselves in a different light of what they could be, and that’s what we wanted,” says Nathan Lam. “We wanted them to see that we could be a positive force in the world. 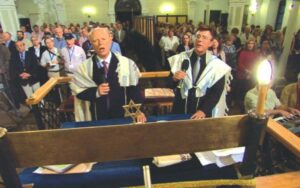 Lam believes 100 Voices will allow those who see it to better understand the revival of Jewish culture in Poland and the progress of Polish-Jewish reconciliation.

“It’s about making connections between people, Lam says. “Only relationships are important.”

Well, I must respectfully disagree, Cantor Lam, with this coda: If the phrase “never again” is to have gravitas, an accurate historical record is singularly important.

Toward that end, 100 Voices adds one more bit of verification to the record General Dwight Eisenhower is popularly said to have ordered be established after allied soldiers liberated Dachau, the infamous Nazi death camp in Germany: “Get it all on record now – get the films – get the witnesses – because somewhere down the road of history some bastard will get up and say that this never happened.”

Are you listening, Ahmadinejad?