Is Hollywood a propaganda purveyor?

Yes. And it always has been 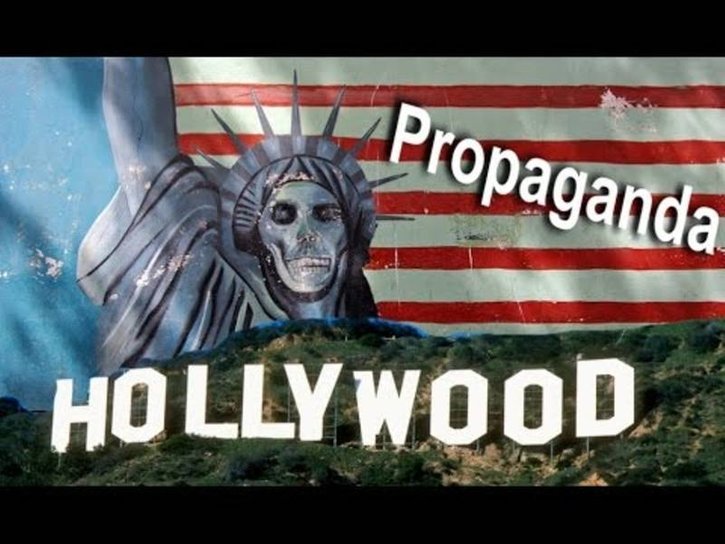 During a Harvard University talk during the silent film era, Paramount studio General Manager Sidney R. Kent accurately described to his audience what American movies were at the time.

"Motion pictures are silent propaganda, even though not made with that thought in mind at all, you cannot prevent it. Imagine the effect on people in the Balkan States [where Kent had marketed Hollywood films] who constantly see flashed on the screen American modes of living, American modes of dressing, and American modes of travel, all the comforts and luxuries to which we are accustomed ... Its influence is working insidiously all the time and even though all this is done without any conscious intent, the effect is that of a direct sales agency."

That passive cinematic sales agency Kent described is still at work creating want and or shaping political and social opinion. The difference is that filmmakers at some point began intentionally placing" silent propaganda" in their fare to either express their own views or those of commercial or political interests that paid in some way to have them included.

Yes, some Hollywood films like "The Kaiser, the Beast of Berlin" and "Pershing's Crusade" were heavy handed, obvious W.W.I propaganda that predated Kent's talk.

But the "silent propaganda" Kent describes is what the most effective propaganda is. It is silent. It is subtle. It is insidious. And, given the nature of story telling, it contains built in plausible deniability to counter claims that it is propaganda. Fact is, the typical movie viewer doesn't realize he's being influenced to think in certain ways by the settings, the props, the mood or the dialogue of a movie or TV show. It's a form of mind control rooted in Freudian psychology and the techniques of Edward Bernays, Sigmund Freud's nephew.

Bernays produced propaganda for the United States during W.W.I and applied those principles later to the public relations industry he founded to serve the interests of our moneyed elites and government powers that be in manipulating the public mind. If you're thinking that sounds just like what CIA chief William Colby and other officials admitted it does during the 1975 Senate Hearings into CIA activities, you're right. 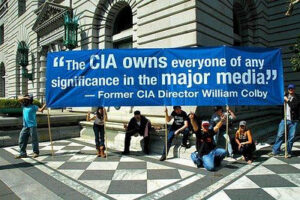 It's the power of suggestion packaged in different wrappers.

* When an actor drinks a Budweiser beer on screen, he's drinking that brand because Anheuser-Busch paid a product placement fee to have it there to create product awareness, want and to motivate sales.

* When the Army put money into "X-Men: First Class," it was trolling for recruits who wanted to live their superhero fantasies on real-life battlefields.

* When the Navy helped Jerry Bruckheimer make "Top Gun," it set up recruiting tables in many theaters for guys who couldn't wait to get on an aircraft carrier. 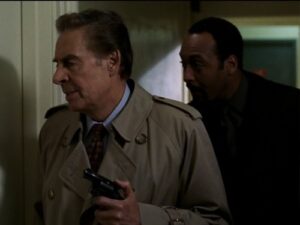 * When TV's "Law and Order" NYPD detective Briscoe (Jerry Orbach) asks, as his character often does, if a gun is registered, he's mouthing the political view of the producers and activist organizations that all guns should be registered. The certainty of that and the numerous other collectivist "Law and Order" script messages was confirmed by actor and former US Senator Fred Thompson who played New York City's District Attorney in many episodes. 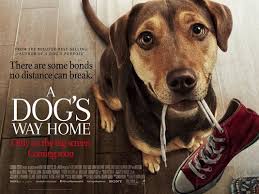 * When hunters shoot a mother Cougar in the currently running "A Dog's Way Home," it's an intentionally placed anti-hunting, anti-gun message added to many other liberal ones in the film that vilify capitalism, private property and local police while praising military veterans, the Veteran's Administration and the notion that federal authority is benign and caring. That latter message is common to the classic "The Grapes of Wrath" and any number of other films. But "A Dog's Way Home" goes farther with its liberal messaging by using Denver's ban on Pit Bull breeds as a metaphor for intolerance and racism. 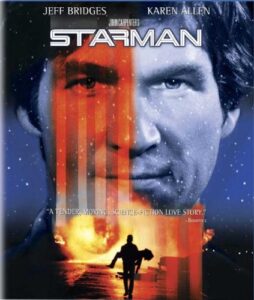 * When Jeff Bridges extra terrestrial alien character in "Starman" says that in his world "there is only one language, one law, one people, no war, no hunger. The strong do not victimize the helpless, etc," he is mouthing the goal of the communist front World Federalist Association that he, his father, Lloyd, and many other actors are members of. I know it's a communist front because I belonged to it myself for a time during the 1960s.

* When "Star Trek" shows us all sorts of alien creatures living and working harmoniously together under a multi planet federal government, it is conditioning its audience to left-wing ideology. 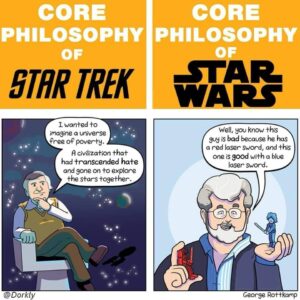 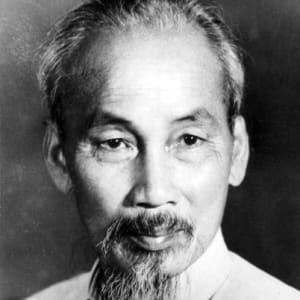 That 1977 portrayal came after the Vietnam war ended, but it helped cinch the pop culture political narrative that America was the evil empire in the conflict and Republican Richard Nixon, not Democrat Lyndon Johnson (Democrats are rarely vilified), was its Darth Vader. 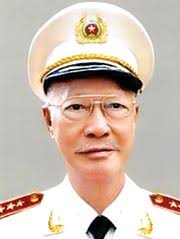 North Vietnamese secret police chief, General Mai Chi Tho, spoke openly about the power of that undermining propaganda: "Ho Chi Minh may have been an evil man; Nixon may have been a great man. The Americans may have had the just cause; we may not have had the just cause. But we won and the Americans were defeated because we convinced the people that Ho Chi Minh is the great man, that Nixon is a murderer and the Americans are the invaders... The key factor is how to control people and their opinions. Only Marxism-Leninism can do that."

As promoted today, they are all forms of collectivism under expanded centralized authority. That collectivist idea is particularly beguiling as Canadian sociologist Jordan Petersen and others have pointed out. 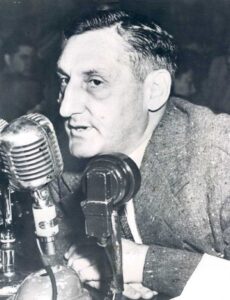 Moscow propagandists understood that and sent communist writer John Howard Lawson, the first president of the Screen Writers Guild, to Hollywood in the 1930s to devise ways of inserting seditious communist messages into films. According to writer John Charles Moffitt, Lawson outlined the points of his tactic this way:

* As a writer do not try to write an entire Communist picture. The producers will quickly identify it and it will be killed by the front office.

* As a writer try to get 5 minutes of the Communist doctrine, 5 minutes of the party line in every script that you write. Get that into an expensive scene, a scene involving expensive stars, large sets or many extras, because even if it is discovered by the front office the business manager of the unit, the very watchdog of the treasury, the very servant of capitalism, in order to keep the budget from going too high, will resist the elimination of that scene.

* If you can make the message come from the mouth of Gary Cooper or some other important star who is unaware of what he is saying, by the time it is discovered he is in New York and a great deal of expense will be involved to bring him back and reshoot the scene.

* If you get the message into a scene employing many extras it will be very expensive to reshoot that scene because of the number of extras involved or the amount of labor that would be necessary to light and reconstruct a large set. That's how undermining communist propaganda was inserted into films and it remains the way undermining collectivist propaganda is implanted in film and TV fare today. A major difference is that many actors and others involved in film making now agree with collectivism in one form or another and may demand its messages be inserted into the films and TV shows they work on. Screenwriter Ayn Rand described in 1948 why that was done. Her points remain valid. 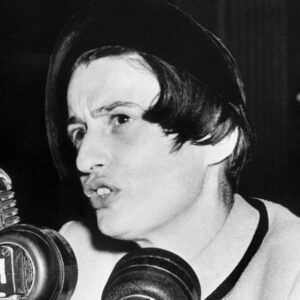 "The purpose of the Communists in Hollywood is not the production of political movies openly advocating Communism. Their purpose is to corrupt non-political movies — by introducing small, casual bits of propaganda into innocent stories and to make people absorb the basic principles of Collectivism by indirection and implication. Few people would take Communism straight, but a constant stream of hints, lines, touches and suggestions battering the public from the screen will act like drops of water that split a rock if continued long enough. The rock that they are trying to split is Americanism."

If "Americanism" is defined as enforceable, constitutional guarantees of personal freedom, due process and equality under law, conservative defenders of those guarantees rarely grasp that for every movie or TV show they can identify as liberal propaganda, there are many more equally collectivist ones they miss because conservatives, in my experience, cannot recognize subtext.

It's a trait I have especially found to be true among conservative Second Amendment activists. Maybe it's a genetic deficiency, but almost all conservatives I encounter are literalists, either entirely or to a great degree, who only hear or see literal words. Unlike most liberals I encounter, they rarely grasp what's within words or subtextually supporting words or how words are delivered or in what context. That is the essence of properly done propaganda. The literal words may say one thing, but they may say something quite the opposite subliminally. 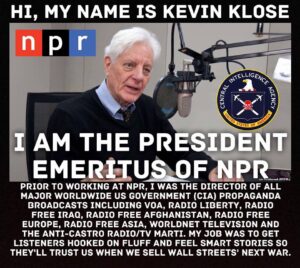 So if your friends tell you you're imaging things when something in a film or on TV show looks like propaganda, remember that the cleverest thing the devil supposedly ever did was to convince people his existence was just a conspiracy theory.